Cars that had been flooded may hide fatal flaws, including damage to electrical and electronic systems that cause airbags either to fail to deploy when needed or to go off unexpectedly, resulting in serious airbag injuries. Airbag lawsuits have arisen in many different situations. This may be just the latest twist in the plot. 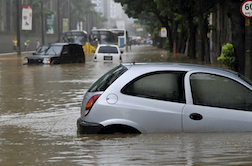 In 2010, the National Firefighter Near-Miss Reporting system described the unexpected deployment of an airbag that injured a firefighter when he attempted to push a car out of floodwaters. The ignition was off and the car was in reverse. The incident report notes that:

the Air Bag Control Unit (ABCU), which reads the sensors and triggers the air bags, is commonly located under the floor mats or driver’s [sic]seat. This puts it in a low lying place and is subject to water damage. Water damage has been known to trigger air bag deployment. This can happen instantaneously or even days or weeks after the initial water damage. There are documented cases where air bags have deployed after vehicles were subjected to flooding.

A similar report described an incident in which a patrolman was called to assist with a car that had been immersed in flood water. As the patrolman leaned into the car, the airbag went off without warning, breaking his arm. The risk obviously threatens drivers as well as emergency first responders.

Long after water-logged cars have been dried out and cleaned up, damage to the electronic and electrical systems may trigger unexpected deployment and result in airbag injuries. This is not the kind of damage that an untrained used-car buyer may spot. According to U.S. News & World Report, Carfax estimates that more than half of the cars that are damaged by a flood are eventually resold. Online research and careful inspection are always essential for used car buyers, but never more so, now that Harvey and Irma damaged cars can be expected to hit the market.

More DEFECTIVE AIRBAG INJURY News
Perhaps more insidious is the fate of parts salvaged from junked cars and then resold. Even when the whole is hopeless, pieces might be resold. Defective airbags sold as replacement parts have largely slipped through massive airbag recall efforts. Described as “ticking time bombs,” they have been implicated in a host of accidents, including a crash that nearly killed Karina Dorado when the defective replacement airbag in her Honda Accord exploded, sending shrapnel into her trachea.

As the survivors of Hurricanes Harvey and Irma begin to sort through the pieces of their lives, some will inevitably look to recover a fraction of their terrible losses by reselling damaged autos or parts. Because defective airbags can cause catastrophic injuries, used car buyers and those in the market for cheap replacement parts must be particularly wary.