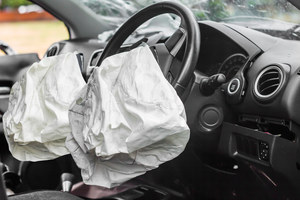 The class action lawsuits were filed on the heels of a National Highway Traffic Safety Administration (NHTSA) announcement in April of a more thorough federal investigation of the faulty ZF TRW airbags that now includes 12.3 million vehicles made by Fiat Chrysler, Honda, Mitsubishi, Toyota, Hyundai and Kia. The airbags are used in model-year vehicles ranging from 2010 to 2019, according to a government document. An initial investigation focused only on airbags in certain Hyundai and Kia vehicles.


The airbag failures may be caused by an electronic defect with the airbag control unit produced by TRW (ZF), which could fail during a crash event resulting in non-deployment of air bags and seat belt pre-tensioners, according to NHTSA documents. These control units may suffer electrical overstress due to harmful signals (electrical transients) produced by the crash event, causing the unit to stop working during the crash. The defect may also prevent seat belt pre-tensioners from operating properly.


The ZF TRW lawsuits are similar to those filed against Japanese airbag maker
Takata, whose defective airbags resulted in the largest U.S. safety recall ever --56 million airbag inflator units were recalled. Takata and Honda were accused in 2014 of a concealment campaign designed to cover-up evidence of airbag defects.

Plaintiffs’ lawyers claim that ZF TRW and the automakers:

• Knew of the airbag defect and the risk of serious injury and death;
• Knew of the defect and tried to conceal it from the public while they continued to promote their products as safe and reliable; and
• Demonstrated a blatant disregard for public welfare and safety.

“Like the Takata crisis, the current investigation focuses on safety issues with faulty airbags that still aren’t resolved after several years and problems that stretch across multiple car companies,” said William Wallace, a safety policy advocate for Consumer Reports. “Any company that delays a recall or fails to promptly report a safety issue should face substantial fines by the government.” Wallace contended that automakers don’t have to—nor should they-- wait until NHTSA concludes its investigations, considering that many lives could be at risk.

To date ZF TRW hasn’t recalled the airbag units under investigation, but the “Office of Defects Investigation is expanding the investigation to include the equipment supplier and vehicle manufacturers using this unit," reported the NHTSA.

A motion has been filed before the U.S. Judicial Panel on Multidistrict Litigation, requesting that all the cases be consolidated in federal court in the Southern District of Florida, where U.S. District Judge Federico Moreno presided over the Takata lawsuits.

Posted by
Maureen Thompson
on September 5, 2021
I was in a major car accident in 2017 feb that left me with very little bone and much pain in my neck. The cars airbags did not deploy. We had a 2003 blazer. We thought it was a as great car until someone came into our laa a ne and hit us head on causing my head and neck injuries. I am in extreme pain everyday sinc we that and because of my concussions I didn’t make sense to anyone so was put on haloperidol even though I was a guardian ad liter and a state of Florida wildlife rehabilitator. I can believe to this day this accident occurred. There was seven or eight cars behind us. They were side swiped. I was so N in shock I made it home, crawling though my husband was driving what was left of my car home. He was the driver of our car. The truck that came at us was so fast it was in the blink of an eye