A Nevada woman suffered serious injuries when the airbag in a used car that her father gave her as a gift exploded. 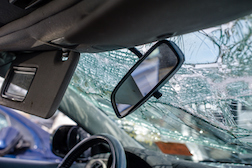 "Karina Dorado’s trachea was punctured by shrapnel from an inflator in an otherwise minor crash in Las Vegas on March 3," according to the Las Vegas Review-Journal. "She was rushed to a trauma center, where surgeons removed pieces that damaged her vocal cords. She is still being treated for neck injuries."

According to the article, the exploding airbag was originally installed and removed from a separate vehicle.

According to the Las Vegas Review-Journal , Dorado's dad bought the 2002 Honda Accord for her in 2016 but didn't know the car's history, which included the car being repaired and resold after receiving a salvage title last spring. After the crash, an inspection revealed that the airbag in Dorado's 2002 Honda Accord was originally from a 2001 Honda Accord, which had been covered by a recall but the inflator was never replaced.

"Honda spokesman Chris Martin said the air bag in the 2001 Accord must have been removed by a salvage yard, or perhaps stolen. Somehow it ended up at the shop that repaired the car eventually bought by the Dorados," according to the Las Vegas Review-Journal.

Takata airbags have recently been the subject of massive recalls and hefty fines.

In January 2017, the US Justice Department ordered Takata to pay $1 billion to the US Government for concealing information about its defective airbags, which have caused several deaths.

Takata airbag injuries have been linked to the airbag’s inflator, a metal cartridge loaded with propellant wafers, which in some cases has ignited with explosive force in a crash, spraying metal shards from the airbag throughout the cabin.

Consumer Reports announced in January that the Takata inflator recall has tripled in size over the past year and will impact 42 million vehicles in the US, with the total number of airbags being between 64 and 69 million.

More DEFECTIVE AIRBAG INJURY News
"This is the largest and most complex safety recall in U.S. history," according to a 2016 press release issued by the National Highway Traffic Safety Administration (NHTSA), which expanded a recall of Takata air bag inflators in 2016 to phase in an addition 35 to 40 million inflators through 2019.

"The inflator that nearly killed Dorado was among the most dangerous made by Takata," according to the Las Vegas Review-Journal. "In testing, inflators taken from older Hondas had a 50 percent chance of blowing apart, prompting the automaker and the NHTSA to issue desperate pleas for people to get them replaced."

Meanwhile, Dorado has a long road to recovery from her injuries.

Karina Dorado still has a hole in her trachea that is covered by a collar and will have to be repaired later, according to the Las Vegas Review-Journal, which also added that Dorado will likely need speech therapy to fully recover her voice.