On Friday, August 18, 2017, attorneys for Karina Dorado, a young woman who suffered severe airbag injuries, filed suit in a Nevada state court. The case highlights the danger consumers face from replacement airbags. These are situations that slip through the cracks of massive airbag recall efforts and remain largely unaddressed by law. 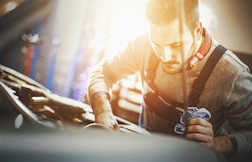 The complaint seeks damages of more than $50,000 each from three defendants: a salvage yard, Nevada Pic-a-Part, and two related companies, Havanna Corp. and D&A Bodyworks LLC, that specialize in buying cars at auction, repairing and reselling them.

The 2002 Honda Accord that Karina was driving in March, 2017 had been declared a total loss by the insurance company after a previous wreck in Arizona. The original airbag apparently deployed in that accident.

The replacement airbag came from a 2001 Accord. It may have been pulled by the junkyard or it may have been stolen. In any event, the 2001 airbag was among the most dangerous ever made by Takata. Tests showed a nearly 50 percent chance that the inflator would rupture in a crash. Karina’s father, who bought the car for her, had no knowledge that the 2002 airbag had been replaced by one more dangerous. When Karina had a fender bender, the 2001 airbag exploded, scattering shrapnel and nearly killing her.

Consumers’ first line of defense against airbag injuries is to check the vehicle’s VIN number on the. National Highway and Transportation Safety Administration’s website. That would not have spared Karina, though, because the 2002 Accord’s airbags were not under recall. Selling automobile parts that are under recall is illegal under federal law, but enforcement is spotty, and it would be naïve to think that salvage sales are a model of vigorous legal compliance.

More DEFECTIVE AIRBAG INJURY News
Although dealers may not sell new cars with unfixed recalls, they may sell used cars under recall.  State laws vary, and the automotive industry has made some attempts at self-regulation, but non-dealer sales are barely regulated at all.

Many of the airbags used to replace defective airbags have also required replacement. Takata was found to be. replacing defective airbag inflators with identical defective parts. What can a consumer, like Karina’s father, do?

Buying only new cars is not really an option. That leaves thorough recall-driven inspection. But why stop at airbags? Why not ignition switches, gas pedals and anti-lock brakes? At some point, the benefit of buying a less-expensive, used car begins to disappear.

The plaintiffs’ bar clearly has a role to play in making safety an economic priority for car manufacturers. State and federal legislators do, as well, by preventing dangerous products from ever entering the stream of commerce.

Posted by
Teresa Moss
on October 23, 2017
Everyone should be aware of and read about the lawsuit Hawaii has against toyota, nissan, ford, and takata. All US states should file the same lawsuits because the dealerships knew well before any recalls (for more than ten years) that the amonium nitrate was unstable and therefore unsafe to use in airbags, while all that time were advertising thier safe vehicles and making BIG profits off the sales and leases of those vehicles. I am terrified of my car and am currently in a free loaner from the dealership only after over a year and six months of driving a recalled car and still no safe replacement. The dealership offered to replace defective with defective of wjich should be illegal and i refused. Everyone is talking about passenger and driver defective airbags but what anout the side and/or other airbags? Metal shooting from any and all places pose a death or injury. Dealerships joyfully took thousands of our dollars when selling thier vehicles to us knowing that there was unstable gas inside the airbags. I want my thousands back!!!!!!!