SJS Ibuprofen: Who Would Have Thought?

Mike had never heard of Stevens Johnson Syndrome before he wound up in the hospital's burn unit—caused by an allergic reaction to SJS Ibuprofen. "There aren't warnings on Ibuprofen bottles about SJS and now I am scared to death to take anything, except maybe Tylenol," he says. Needless to say, Mike is angry with the drug company for not including SJS side effects on its labelling. 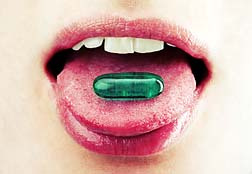 "I was prescribed a heavy-duty dose of Ibuprofen as an inflammatory to help a knee injury and about six days later I got a rash," says Mike (not his real name pending a lawsuit). " It first developed in between my fingers and my eyes started bothering me—they were itchy and watering and pus was coming out of my tear ducts. The rash was even on my eyelids, it was very painful and it was also on my penis—talk about uncomfortable...

Anyway, it started to really alarm me so I went to ER. They diagnosed me with contact dermatitis, figuring I had run into poison ivy or poison oak and maybe not washed my hands, gone to the bathroom, rubbed my eyes. I was prescribe prednisone and sent home.

The prescription lasted 4 days and I kept taking the Ibuprofen. Within another week, the rash came back but it was much worse. This time it was in the same areas but my eyes were swollen shut and my vision was blurry—I couldn't drive. It was anywhere that I had a pit in my body, behind me knees, inside my elbows. And this time I had watery, small blisters that came in clusters. So I went back to ER but they determined I had the same condition and the prednisone may not have been enough so I took more prednisone and of course more Ibuprofen.

The next morning I went to my regular doctor and immediately she sent me to a dermatologist in Vancouver, the closest city to me, about 50 miles away. She told me to run, not walk. My 73-year-old father drove me.

Right away they admitted me to the burn unit at the main hospital. I was terrified. At that point nobody had explained what I had, including my regular doctor. Neither of them had seen anything like this—they had just read about it. Fortunately, their suspicions were correct—otherwise I might still have been taking Ibuprofen and wound up dead! The dermatologist took 4 different biopsies from areas where I had the clusters of blisters and he met me at the hospital 2 hours later—I was diagnosed with SJS, albeit a mild form.

He explained Stevens Johnson Syndrome and told me it is life-threatening.

At this time I was all alone—I'd never been that scared in my whole life. This happened two years ago: I was 36 years old, 6'3" and not afraid of too many things but this was something else.

I was ordered not to take any meds whatsoever, because I had an allergic reaction to some drug. This was the first time I found out that the meds could have been the cause, but once he informed me that I had SJS and what it is caused from (remember I can't see—I was scared to death, I couldn't even see my own rash) I got really angry.

I was in the burn unit for 4 days, having blood tests. There is no treatment for SJS whatsoever; I guess it was like detox; all I could do was wait until the toxins had left my body. I was told not to put anything on my skin and all they could give me was a saline drip and a pain killer. By the third day in hospital my vision returned and my skin started to peel.

It never occurred to me that Ibuprofen could cause such a horrific illness; I have taken over-the-counter Ibuprofen before but never this much at once. And I have never been allergic to anything in my life before this.

I talked to my doctor about prescribing this toxic and possibly lethal amount. She just advised me not to take it again. She also said it is a rare condition, but after I did some research SJS doesn't seem to be so rare. Shame on me for not taking the time to look it up online but just about everyone takes this medication at some point in their lives, so how rare can it be?

More SJS IBUPROFEN News
This happened in October, 2006. By December I was getting angrier. My medical bill that I had to co-pay was over $10,000 (the medical bills were over $40,000) and I lost about 3 weeks of work. I am a heavy equipment operator and I couldn't go back to work for a while because when my skin started peeling off it hurt so much all I could do was take cold showers to relieve the pain.

To this day my skin has scarring and places where the pigment has changed that doesn't tan. These areas are very sensitive and I definitely can't expose my face to the sun at all, probably ever; I get sunburned where I wouldn't get sunburned before, although these patches aren't bad enough to have skin grafts. And I have emotional scars. I hope the drug manufacturer will mandate a warning label on every bottle of anything that has Ibuprofen in it; I don't want anyone to suffer needlessly."
READ ABOUT SJS IBUPROFEN LAWSUITS