Advil, an ibuprofen based medication, is one of the most common drugs associated with Stevens Johnson Syndrome (SJS) in children. SJS is typically an allergic reaction to a drug and can be life-threatening. Advil (Ibuprofen) was approved for public use by the FDA in 1973 and is considered the first non-Aspirin, non-Acetaminophen based non-steroidal anti-inflammatory (NSAID) medication. It is sold under various other brand names including Motrin, Children's Advil, Children's Motrin, Medipren, Nuprin, Pediacare Fever, etc.

Send your Ibuprofen Stevens Johnson Syndrome claim to a lawyer who will review your claim at NO COST or obligation.
GET LEGAL HELP NOW 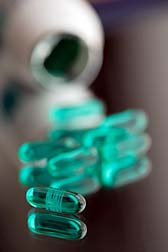 Ibuprofen found immediate popularity with Physicians and the general public when it was approved for over-the-counter (OTC) sales in the United States. In many cases it exhibits the milder stomach effects of Acetaminophen (over Aspirin, a powerful stomach irritant) without as much liver and kidney toxicity, supposedly allowing for higher dosing and longer use.

Stevens Johnson Syndrome and Toxic Epidermal Necrosis (SJS/TENS) are serious and life threatening skin disorders believed by many to be the result of an adverse reaction to drugs, including NSAID medications including Ibuprofen, Cox-2 Inhibitors and others. While viral infections and some forms of cancer can also cause the condition, the Stevens Johnson Syndrome Foundation states that the leading cause of SJS/TENS can be traced back to adverse drug reactions.

The symptoms of SJS/TENS include painful blistering of the skin and mucous membranes, which in many cases is preceded with flu-like symptoms and a high fever. As it evolves, the skin can literally slough off the victim's body. In addition, it tends to affect the eyes with mild to severe conjunctivitis, all the way up to severe corneal perforations. Left untreated, SJS/TENS is life threatening. In many cases, SJS/TENS patients are treated in Intensive Care Units and in Burn Units.

In February 2005 a group of physicians and victim's families called on the FDA to warn the public about the potentially fatal skin condition associated with Advil and other Ibuprofen based formulations. About four in every one million users develop the condition and Ibuprofen remains one of the most popular and regularly available OTC painkiller/NSAIDS in the world today, used by billions of people worldwide. Reports of SJS/TEN reactions due to Ibuprofen have been increasing, according to the FDA's Medwatch Program.

Many Ibuprofen medications are sold with no warning about the potential for SJS/TENS. In fact, most, like Children's Advil, did not contain any label warning until May 2006. Currently, SJS warnings are required on prescription-strength ibuprofen and other prescription drugs linked to SJS, but the FDA has not yet required ibuprofen drug manufacturers, such as Wyeth, the maker of over-the-counter Children' Advil, to include the life-threatening disease or its symptoms on non-prescription labels.

Many patients took this medication without knowing the potential for this dangerous side effect, and many developed SJS/TENS as a result.

Children's Advil and Children's Motrin are commonly utilized painkillers for children between two and eleven years of age. While this allergic reaction has been reported in adults, it has been noted that there may be a trend where SJS/TENS reactions are increasing in children due to the use of Ibuprofen based pain formulas.

A three-year-old girl died in 2003 one week after taking Children' Advil. In 2005 the parents of Heather Rose Kiss of New Jersey filed a lawsuit against Wyeth, Inc., accusing the health-care giant of accuse Wyeth of wrongful death, negligence, defective design, breach of express warranty, breach of implied warranty, and failure to warn consumers and doctors of the potential health risks—including Stevens-Johnson Syndrome (SJS) and Toxic Epidermal Necrolysis (TEN)—of taking over the counter (OTC) Children's Advil.

The lawsuit further alleges that Wyeth knew of an association with Advil and SJS from their own clinical tests in the late 1980s, but failed to warn physicians and consumers about the increased risks of SJS and TEN. As well, Wyeth documented cases of SJS that occurred in a study to support the approval of the OTC Children's Advil, but failed to disclose this information to physicians or consumers.

If you or a loved one has suffered from SJS or TENS, you may qualify for damages or remedies that may be awarded in a possible class action lawsuit. Please click the link below to submit your complaint and we will have a lawyer review your Advil complaint.
Please click here for a free evaluation of your Ibuprofen Stevens Johnson Syndrome claim
Last updated on May-12-14

One young boy in the United Kingdom knows all too well the pain of Stevens Johnson Syndrome. His allergic reaction to what most people would describe as a harmless medication almost took his life. Some patients, or their families, have filed lawsuits against the makers of drugs allegedly linked to SJS, claiming they were not adequately warned about the risks.READ MORE
Did Advil Ibuprofen Cause Teen's Stevens Johnson Syndrome?

He is only 11 years old. And Calvin Lock's mother was convinced her son was going to die in the midst of battling Stevens Johnson Syndrome. The British family was devastated when their son was diagnosed with the life-threatening condition after taking ibuprofen.READ MORE

Posted by
Leola jollt
on August 10, 2021
My Doctor they should had taking me off . I been taking g it over 10 yrs or more
Posted by
Grace
on July 26, 2017
Took advil four every four hours for 17 years. No one warned me against long term use. Now i have an auto-immune disease that, while seronegative, has Lupus symptoms. My rheumatology doctor warned me against taking Advil as it can cause drug induced auto-immune disease. I am pretty sure the companies making this drug are well aware of the damage ibuprofen can and does cause.
Posted by
Brenda Byrd
on February 6, 2017
I have stage 3 kidney disease my specialist says there is no sign of any other reason other than I took Advil for headaches all my life
Posted by
Suzanne Shermer
on January 16, 2016
After a stroke in 2011 , and the ensuing pain of resulting inactivity, I took Advil as prescribed. My creatinin numbers began to increase. I now have Stage 3 kidney disease! Has a link between ibuprofen and CKD been established? Has a class action lawsuit been activated?
Posted by
JACKIE HARRELL
on September 18, 2015
Per doctor's orders I took 400 mg of Advil with 7 meals.I stopped before he had instructed me to stop.

I lost 20 to 30% of soft to medium tones in my right ear. I had already had a "base" test so the one after the Advil event proved that it was the result of taking it.

Posted by
California
on July 26, 2012
My kidneys are damaged from the use of Ibuprofen. I have what is called Minimal Change Disease.
Posted by
California
on July 7, 2011
Lost of vision in Right eye, numbness on my right side of my body, have been out of work since its happen.
Posted by
Virginia
on April 19, 2011
Is SJS the only lawsuit against Ibuprofen? My husband died of an overdose of Ibuprofen. He did not have SJS but he developed a bleeding ulcer and then kidney failure. After 5 months in the hospital, he passed away. He swore he took 3 tablets 3 times a day for less than 10 days. I believe he misread the dosage but until this happened, we were not aware that this small a dosage was so dangerous.
Posted by
Wisconsin
on June 19, 2009
Pain, loss of work, loss of disability benefits, scarring that never fades, loss of social life and meeting new people.
Posted by
California
on March 10, 2009
I still have sensitivity in my feet. I cant wear shoes for very long. Sometimes my feet keep me from sleeping at night so I have to put lotion on my feet calm them. Sometimes when I look at my feet or my legs, all I see is what happened about 3 years ago, even though I am healed now, I still remember the blisters because it was so traumatic and I end up crying because it hard to forget it.