Auto accidents are a major cause of injury and death in the United States, causing 3 million injuries and killing over 40,000 people per year. According to the National Highway Transportation Safety Administration (NHTSA), approximately 16,600 people died in motor vehicle accidents in the US between January 1, 2009 and June 30, 2009. Washington auto accidents are a serious concern. Victims who are injured in a Washington car crash may be eligible to file a lawsuit against the parties responsible for the accident.

Send your Washington Car Accident claim to a lawyer who will review your claim at NO COST or obligation.
GET LEGAL HELP NOW

There are many causes of car accidents in Washington, including driver distraction and/or negligence. Negligent driving can involve a variety of violations of Washington law. These include disobeying traffic signs or lights, driving above the speed limit, failing to signal when turning and driving under the influence of drugs or alcohol. 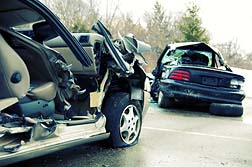 In Washington, it is a traffic infraction to text message while driving. Furthermore, Washington State has a hands-free driving law. This means that the use of wireless devices that must be held to the ear, thereby occupying one of the driver's hands, is illegal. The use of cell phones is only permitted if they are used via a hands-free device, such as a headset. There are some exceptions to these rules such as if the cell phone is being used in an emergency situation.

Other Causes of Washington Car Accidents

Some car accidents are the result of poor road conditions or defectively made or designed vehicles. In such cases, the parties responsible for either road maintenance or the manufacture of the vehicle could be held liable for any damage incurred in the car accident.

A car accident lawsuit requires that the plaintiff prove liability on the part of the defendant. Criteria that must be met when proving liability are: The defendant does not necessarily have to be the driver of another vehicle. It could be a vehicle manufacturer, a company responsible for road maintenance or any other party whose actions, or inaction, contributed to the car accident.

If you are injured in a Washington auto accident, you can generally bring a claim or lawsuit to recover money spent on medical bills and therapies, property damage, lost wages and lessened earning capacity. Furthermore, you could be compensated for emotional and physical pain and suffering.

If you or a loved one has suffered damages in this case, please click the link below and your complaint will be sent to a lawyer who may evaluate your claim at no cost or obligation.
Please click here for a free evaluation of your Washington Car Accident claim
Last updated on Apr-14-10

A father who was trapped in his vehicle with his daughter as the result of a Washington state car accident has died recently.READ MORE
Washington Car Crash Proves Fatal

A two-car collision involving an SUV and a smaller car has left one person dead and injured another. Thirty-year-old Sara Cornis of Seattle was killed in the Washington car accident, which occurred on August 1 on Highway 20 near Minkler Road, about five miles east of Sedro-Woolley.
READ MORE
Young Couple Dies in a Washington State Car Accident

A young couple was recently killed in a Washington state car accident.READ MORE

Posted by
Mary A Henry
on October 24, 2019
I rented 2 storage from uhaul. I was told I didnt pay but I have receipts. I contacted the GM with receipts. After trying to resolve the issue with them by verify receipt. At least 8 times are more.GM contact me for the 1st time after I he received my email with verified documents showing my storage paid up.GM call said to me He is filing a eviction on my units he states I came to uhaul after hours an tried to access my units. I said I did its a lie. (I didnt share with him I was at the casino)but the GM said he has me on camera and footage an his system showed I used my card an I still tried to talk to him he said I also owe uhaul I said I emailed him my receipts he said yea I received that stuff I even sent him copy of my debt card receipt show it was paid the GM said. He wasnt renew my contract my owe fees and me illegal unauthorized to use the card after hours. I stated again it wasn't me.But the GM hung up in my face connect the headquarters made a complaint. Now I'm seeking legal advice. Even if I have to pay for my own lawyer just need help. Im afraid to go pay storage I owe on Oct 23. But I have charges I dont own on the account so I disagreed.If you can help are any suggestions Im open. Thank you all have a great rest of your day.