Almost four months to the day before his own death, Zachary Smith saw his best friend killed in a car crash when his vehicle spun out of control in Kootenai County, Washington. Brandon Hay was not wearing a seat belt. 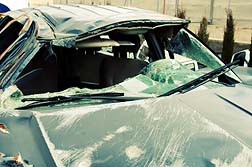 Zach Smith became the second student at Tekoa High School to die under similar circumstances. Smith was driving his family's Chevy Tahoe along Wheeler Road in south Spokane County late November 3rd when his car rolled off the road into a ditch. Smith, who had not been wearing a seat belt, was found dead 25 feet from the vehicle.

He was one day shy of his 18th birthday.

According to the Spokane County Sheriff's office, Smith was speeding in a 45 mile per hour zone. KXLY Spokane reports that excessive speed likely caused the young driver to lose control of the car.

Both Hay and Smith were members of the senior class of 14, now reduced by two.

Smith was active on his high school football team, the Tekoa-Oaksdale-Rosalia (TOR) Nighthawks, who played their final game just three days after Smith's death. The community decided to go ahead with the game as a tribute to their fallen teammate. Members of both teams wore Smith's number 12 on the back of their helmets. Some of his teammates painted his initials and the number 12 on their faces.

On the field, the initials ZS were added to the midfield stripe.

More WASHINGTON CAR CRASH News
Cris Smith, the father of the deceased, returned to his post as announcer for the home team. Prior to the start of the game, he announced the names of the Nighthawks seniors, calling out his son's name last.

"They're such a strong family. They're so supportive," says TOR coach Ken Lindgren. "[Cris Smith has] emceed different banquets we've had, speaks whenever you ask him. And look what he did tonight. His son passed away on Tuesday and he announces the game Friday. It's incredible strength and the faith that they have is pretty evident in all they do. I love 'em."

The Walla Walla Union-Bulletin reported that the Smith family returned to the field after the game, where the team joined them in releasing a bundle of silver and blue balloons in their son's honor.