More WASHINGTON CAR ACCIDENT News
A Washington car accident on Highway 9 that killed four people this past weekend is Snohomish County's deadliest drunk driving accident to date, according to a report on HeraldNet.com. 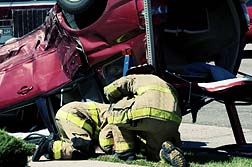 An unnamed 27-year-old local man was driving home intoxicated on Sunday night when he ran a stop sign and plowed into an oncoming car, killing the four passengers in his car, according to the Associated Press. The driver and one passenger sustained minor injuries from the crash.

A second drunk driving charge occurred that night when the crime scene investigator who responded to the crash was arrested for driving while intoxicated. The scene was said to be uncompromised, despite the investigator's condition.

The National Highway Transportation Safety Administration (NHTSA) reports that approximately 16,600 people died in traffic accidents during the first half of 2009. Non-profit DUI opponents Mothers Against Drunk Driving (MADD) claims that 11,000 people die from alcohol related collisions every year in the U.S.