A car accident early in the New Year spelled disaster for a young Washington man. The irony is that 22-year-old Joshua Kuhlman made sure his intoxicated friends got home safely after a night of drinking, only to lose his life in a drunken car accident mere hours later. 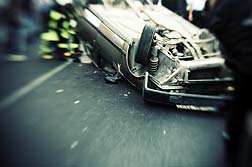 According to Tuesday's edition of the Washington Post, Kuhlman and his roommates had been enjoying a night of drinking throughout the evening of January 2. When Kuhlman's friends headed out from their shared accommodation in Arlington County, Kuhlman apparently handed them money for cab fare, saying that he wanted to be sure they arrived home safely. As for himself, Kuhlman admitted he was in no shape to drive and planned to stay in with his girlfriend.

The assumption was that the young man's girlfriend, identified by the Washington Post as Amanda Mullens, would be traveling to him from her home in Northwest Washington.

Authorities later speculated that those plans must have changed. On January 3 at 10 am, a jogger found Kuhlman's Honda Civic submerged in Rock Creek. By that time only a tire was visible in the water. Authorities had to chip away at the ice to reach the driver, who was found unresponsive. Kuhlman was later pronounced dead in hospital.

More WASHINGTON CAR ACCIDENT News
According to the Post, Mullens and Kuhlman had been in communication sometime prior to the accident. Mullens is reported to have urged Kuhlman to avoid driving that night. For his part, Kuhlman said she could expect to see him on Sunday. At some point thereafter Kuhlman got behind the wheel of his car to drive to Mullens' house.

Authorities told the Washington Post that Kuhlman must have lost control of his car while negotiating Rock Creek Parkway. The car entered the water just below P Street NW.

"I think it's pretty cut and dried exactly what happened," said Kuhlman's roommate Brendan Kittredge. "Josh had been here with us before and we were all going out to the bars, and he communicated to me that he was going to stay and Amanda was coming over to see him," Kittredge said. "After we had left, I guess the plans changed…no one knew he was going there, obviously, which is one reason no one knew he was gone."

If you have suffered losses in this case, please send your complaint to a lawyer who will review your possible [Washington Car Accident Lawsuit] at no cost or obligation.
Request Legal Help Now