Send your Exploding Pressure Cooker claim to a lawyer who will review your claim at NO COST or obligation.
GET LEGAL HELP NOW 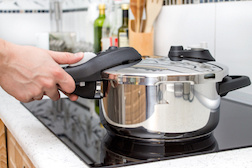 Consumers have reported more than 30 incidents of injuries or experiences with exploding pressure cookers on SaferProducts.gov the consumer product safety information database website of the US Consumer Product Safety Commission (CPSC).

Reports include incidents of unexpected pressure cooker explosions such as this account filed by one consumer who used the Maxi-Matic Elite 13-Function 8qt Electronic Pressure Cooker: "The lid of the pressure cooker broke away from the body with a loud boom. The lid was thrown through the air and broke my light fixture in the dining area about 4 feet away and landed on the floor of the kitchen. Things fell so fast and hard it ripped up pieces of the flooring."

Another woman reported injuries she suffered while making soup with the Tristar Power Pressure Cooker XL. After turning the pressure relief valve and waiting until the valve dropped, she began to turn the lid to remove it "when the pressure from the cooker exploded, causing hot, scalding soup to erupt all over my kitchen and myself. I received second degree burns on my left hand and right breast."

In 2015 Breville recalled more than 35,000 of its 6-quart capacity Fast Slow Cookers after receiving consumer reports of a defective sealing gasket that could allow the cooker's built-up pressure to release without warning.

The defective gasket "poses a risk of burns to the user of consumers nearby," according to the recall notice: "Breville USA has received five reports of steam or hot contents escaping from the pressure cooker, resulting in five reports of burns, including second degree burns to the hands, arms or stomach." That same year, Double Insight released a recall on its Instant Pot Pressure Cooker because the cooker's thermometer probe could cause electric shocks.

There have not yet been recalls on any of the pressure cookers manufactured by Tristar, Fagor America, Tabletops Unlimited or Maxi-Matic.

In June 2015 a Texas couple filed a federal lawsuit Ninfa Vasquez et al v. Tristar Products Inc., Case No. 1:15-cv-00108, US District Court, Southern District of Texas, Brownsville Division against Tristar Products. The plaintiffs claimed that the Tristar Power Cooker they bought after seeing it advertised on television exploded the first time they used it, causing extensive and severe burns to Ninfa Vasquez when the scalding hot pinto beans she was cooking blew out of the pan and seared her body.

If you or a loved one has suffered similar damages or injuries, please fill in our form and your complaint will be sent to a lawyer who may evaluate your claim at no cost or obligation.
Please click here for a free evaluation of your Exploding Pressure Cooker claim
Last updated on Feb-27-17

Toddler Loses Leg and all her Fingers in Pressure Cooker Explosion

Miami, FL Two-year old Samantha Gonzalez was grievously burned in 2015, when her grandmother’s Tristar “As Seen on TV” pressure cooker malfunctioned. The damage will last as long as Samantha lives. Exploding pressure cooker injuries have been the source of many lawsuits. But this is not the kind of case that leads to a tidy legal resolution. Like life, it’s messy.READ MORE
Six Sue Tristar for Exploding Pressure Cooker Injuries

Philadelphia, PA On September 19, 2017, six burn victims filed a lawsuit against Tristar Products, Inc. in the Philadelphia Court of Common Pleas. They claimed they were hurt when their Tristar pressure cooker’s advertised “Built-In Safety Features” failed. All of the incidents cited in In Re: Kenneth Christian, et al. v. Tristar Products Inc. involve the same pressure cooker, Model No. PPC-790, but many Tristar products have been implicated in similar pressure cooker explosions. The litigation can be expected to grow.READ MORE
Tristar Pressure Cooker Company and Texas Couple Reach Settlement

Brownsville, Texas According to documents filed on August 8, 2017 (case 1:115-cu-00) filed in a Brownsville, Texas court Tristar Products Inc. and Ninfa Vasquez and Jose Vasquez have “reached a settlement of all the issues pending in this lawsuit”. No details were made public.READ MORE

Posted by
David Boyd
on May 13, 2018
Two cookers and the both leak the company fail to respond to my request for seal replacement