Pressure cookers have been around for generations. Your grandmother or great-grandmother most likely had one at the ready for preparing certain dishes. They were big, heavy and fashioned in most cases from cast iron. They weren’t pretty, but they were sturdy and built like a tank. Most would not recall a pressure cooker explosion happening in Grandma’s time. 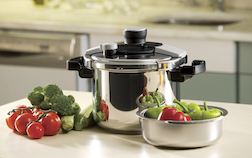 But they’re happening now, with many a plaintiff lining up to file an exploding pressure cooker lawsuit.

Why is this happening? A South Florida couple wants to know.

Lili Bekteva and Serg Tchernykh have some issues with the Tristar Power Pressure Cooker XL that exploded in their kitchen in October of 2014. The plaintiffs, who are married, allege that Serg suffered serious burns when he attempted to open the pressure cooker and the contents exploded in his direction, spewing super-heated liquid all over him. According to an account from CBS4 Miami (06/24/15), Tchernykh suffered second-degree burns to his arms, from his elbows to the fingertips.

“He burned his arms completely,” Lili said, in comments to a reporter from CBS4, “and when he removed the clothes, [and] shorts, his leg also was burned.”

Bekteva herself suffered injuries – less serious than her husband – but a burn and swelling to her hand nonetheless.

After being out of favor and dropping from popularity for decades, the pressure cooker is making a comeback – in part due to time-crunched couples seeking ways to cut preparation time for home-cooked meals, the availability of new models and the promotion of those models through a plethora of television infomercials.

The Tristar Power Cooker XL is also available at retail. Bekteva and Tchernykh bought their unit at a location of Bed Bath and Beyond – however television advertising will often plant the seed for need.

Now, their needs have changed. Rather than continue using a pressure cooker, Bekteva and Tchernykh are pursuing a pressure cooker lawsuit against Tristar and Bed Bath and Beyond and want the pressure cookers off the market before someone else gets hurt. While the Tristar unit is marketed with a host of safety features – including a safety check which is designed to prevent the unit from being opened too early – such features did not prevent the relatively new product from exploding.

The Tristar Power Cooker XL which is alleged to have exploded and caused exploding pressure cooker injuries to Bekteva and Tchernykh is relatively new – the explosion which injured the South Florida couple in 2014 happened in the same year that Tristar applied for its trademarks and copyrights.

And the event which befell the South Florida couple is not the only pressure cooker explosion reported in recent months or years. CBS4 reports that two other complaints have been filed with the Consumer Products Safety Commission (CPSC) with regard to the Tristar product. And there have been problems with products from other manufacturers.

To that end, the manufacturer known as Breville recalled in excess of 35,000 units of its Fast Slow Cooker line following reports of a defective sealing gasket that could allow pent-up pressure within the appliance to release unexpectedly. There have been five reports of exploding pressure cooker injuries reported to the CPSC involving the Breville products.

One other manufacturer – Double Insight – issued a similar recall due to problems with its product.

Tristar has yet to issue a recall.

More EXPLODING PRESSURE COOKER News
Potential issues with modern pressure cookers include the thoroughness of testing, where the units were manufactured and the strength and integrity of the steel used. Anyone attempting to open a can of soup these days will note that the metal in cans is much thinner than previously, often bending with little effort while grappling with a can opener.

Plaintiffs filing an exploding pressure cooker lawsuit allege the units are unsafe. “It is very dangerous,” Lili Bekteva told CBS4 in Miami. “I’m sure they have some kinds of issues and defects.”