A Miami woman allegedly suffered burns to part of her body when a pressure cooker exploded while she was cooking, according to WPLG-10 news. 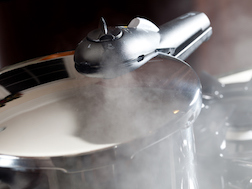 The Broward County news station reported that the woman, who lives in Miami suburb Miami Gardens, was cooking beans and rice in a pressure cooker on May 2, 2017 when the machine exploded. Neighbors told WPLG-10 that they could hear the woman screaming from outside the house. Maria King told reporters that she called for help and assisted the woman with soothing her wounds.

"The lady was screaming in the street," King told WPLG-10. "We got water and I put ice on her."

The woman, who wasn't identified in the news segment, wasn't the first victim of a pressure cooker allegedly exploding without warning. Pressure cookers are sealed pots that turn liquid into steam when heated, allowing foods to cook more quickly as steam pressure rises and the water's boiling point increases.

Consumers have reported numerous incidents of injuries or experiences with exploding pressure cookers on SaferProducts.gov, the consumer product safety information database website of the US Consumer Product Safety Commission.

More EXPLODING PRESSURE COOKER News
Consumers have also filed lawsuits related to exploding pressure cookers. A Texas couple in 2015 filed a lawsuit against Tristar Products after the Tristar Power Cooker they bought allegedly exploded the first time they used it, causing extensive and severe burns to the cook. A Florida couple also filed a lawsuit against Tristar in 2015 when their Tristar Power Pressure Cooker XL allegedly blew up when the user opened the lid.

In 2015, Breville recalled more than 35,000 of its 6-quart capacity Fast Slow Cookers after receiving consumer reports of a defective sealing gasket that could allow the cooker's built-up pressure to release without warning. According to the recall notice, the defective gasket posed "a risk of burns to the user of consumers nearby."

There have not yet been recalls on any of the pressure cookers manufactured by Tristar, Fagor America, Tabletops Unlimited or Maxi-Matic.

The injured Miami woman was flown to a hospital via helicopter after the explosion and is expected to recover, according to WPLG-10.