A Miami woman allegedly suffered second-degree burns on her hands, arms and chest when a popular pressure cooker exploded while cooking stew on her stovetop, according to CBS Miami. 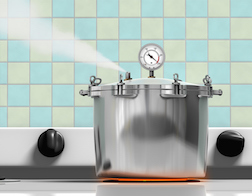 Beth Morales told CBS Miami that the Tristar Power Pressure Cooker XL exploded without warning a few months ago while she was cooking dinner. When Morales turned the lid to open, the contents allegedly "spewed out," according to the CBS Miami TV news report:

“Like a volcano erupting. More like, if you sat on top of a volcano and you got up and it was mad at you and it squirted everything at you. It was kind of like that,” she recalled.

“I just started screaming until one of my children came down and said, ‘Why are you screaming like that?’ And I said, ‘Just take everything off me. Take my clothes off, throw ice on me. Ice packs. I need ice packs."

Pressure cookers are sealed pots that turn liquid into steam when heated, allowing foods to cook more quickly as steam pressure rises and the water's boiling point increases. As a result, pressure and temperatures in the cookers run extremely high.

While Stewart plans to try every case he takes on, manufacturers may sometimes admit liability if the explosion was caused by a known defect, he says. "Sometimes if it's a defect that's not widespread, you can end up trying the case," says Stewart.

Complaints about various brands of exploding pressure cookers have prompted multiple lawsuits filed by people alleging that they suffered severe burns when a pressure cooker exploded while they were cooking.

"When these things go off, it's not a little boom," says Stewart. "It covers the whole kitchen. It's not always the cook who is injured. I've had more children injured who were in the kitchen."

More EXPLODING PRESSURE COOKER News
If a person is injured by a pressure cooker explosion, it's crucial that the person not only see a doctor but also save the shrapnel-like metal and plastic pieces of the exploding cooker in case of a lawsuit later.

"If you throw those away, you can't prove whether there was a defect in manufacturing or a defect in handling," says Stewart.

Due to state and federal statutes of limitations, it's not a good idea to wait too long to contact an attorney, says Stewart. Also, it's best to consult an attorney soon after any injuries, since it may be months or years before a person knows the extent of skin scarring, he says.

Morales has filed a lawsuit in hopes of preventing more injuries, according to CBS Miami.

“I look at myself in the mirror and I cry because I’m not like I used to be anymore,” Morales told CBS Miami.

Posted by
David L Boyd
on July 10, 2017
cooker vent blow off hurt finger
Posted by
Barbara Jones
on May 7, 2017
My husband suffer 3rd degree burns on his chest arms. He was trying to cook ribs in the pressure it made him scream and hit up against the wall and the floor and to the emergency room.. left embarrassing scars