In an example of doing things 'by the book' at the possible expense of moral fairness, a McDonald's employee who filed a workers compensation claim after being shot while on the job was denied workers comp. Workers compensation law exists to protect the rights of employees who are injured in the course of their duties. 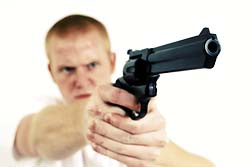 In this case, there appears to be some dispute as to just what those duties are.

Here's the story. In August of last summer a customer at a McDonalds restaurant located on Rodney Parnham in Little Rock, Arkansas began assaulting a woman. As the facility's video surveillance tape shows, McDonald's employee Nigel Haskett—dressed in the familiar blue corporate uniform—rushed to the aid of the woman and forced a man later identified as Perry Kennon away from her. Haskett is seen struggling with the much larger Kennon and the two struggle towards, then through the door of the restaurant.

That's when Kennon is alleged to have pulled a gun and proceeded to shoot the polite store employee three times in the stomach. The victim is seen walking back into the restaurant before collapsing onto the floor. Fellow employees and customers tended to him until medical help arrived.

Haskett, who is described as a polite and remarkable young man, endured 3 surgeries at a cost of $300,000. After a recovery that took six months, Haskett is reported to have filed a workers compensation claim for his injuries.

According to FOX16 in Little Rock, Haskett's claim was denied.

"We've denied this claim in its entirety," says Misty Thompson, a claims specialist with Risk Management Resources (RMR), a division of Ramsey, Krug, Farrell and Lensing. "It's our opinion that Mr. Haskett's injuries did not arise out of or within the course of his employment."

RMR acted as a third party administrator on behalf of the Arkansas McDonald's Self-Insured Trust. The fund is comprised of 28 entrepreneurs representing more than 100 McDonalds franchise stores in the state of Arkansas.

The reason for the denial of Haskett's workers compensation claim was said to be that his heroic actions contravened McDonalds' policy pertaining to a robbery situation. According to an orientation document, workers are instructed not to do anything that would put themselves, or anyone else at risk during a robbery.

However, Haskett's attorney says that no robbery was committed. As well, Haskett's supervisor at the restaurant thinks of his employee as a hero.

"We are all grateful to Nigel and that's why it is so unfortunate that he's having a difficult time with the insurance claim," franchise owner Ray Nosler told FOX16 in a statement. "Because the insurance claim is still pending, I'm not able to say more about it, but I hope his claim will come to a quick resolution and the right thing will be done for my employee."

Nosler contributed to a fund, established for his employee in an effort to help him pay some of his bills until his workers compensation claim is ironed out. The franchise owner later told FOX16 TV in Little Rock that if Haskett's claim denial is upheld at a workers compensation hearing and in the absence of any other insurance options, Nosler intends to make sure Haskett's medical bills are paid.

More WORKERS COMPENSATION News
Haskett no longer works for McDonalds and is moving his family to another city. No matter, according to Nosler. Haskett is a Good Samaritan and should not be made to suffer as a result of his actions.

Six days after the attack, Kennon was arrested and charged with the shooting of Nigel Haskett, who remains confused over the denial of his claim.

"I was in uniform, I was working, I was in drive-through and I was on the schedule. Ok, it ended up outside, I'm still on the premises, I'm right there by the door," he told FOX16 in an interview. "How could it not be in the scope? I didn't understand that."

If you have suffered losses in this case, please send your complaint to a lawyer who will review your possible [Workers Compensation Lawsuit] at no cost or obligation.
Request Legal Help Now