If you eat salsa, you'd better take out the heat. The U.S. Food and Drug Administration (FDA) has updated its Salmonella Saintpaul Outbreak warning. Tomatoes have been replaced by jalapeno and Serrano peppers and avocadoes.

On July 19th, the FDA recalled Jalepeno Peppers and Serrano Peppers distributed between May 17th and July 17th, 2008; and Avocados, all sizes, with lot #HUE08160090889 from Grande Produce of Hidalgo,Texas as a precautionary measure, because they have the "potential" to be contaminated with Salmonella. 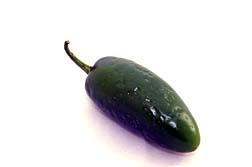 One jalapeno pepper from a farm in Mexico has proven to be a positive genetic match for the bacterial strain that has sickened more than 1250 persons with the same genetic fingerprint. Although the FDA found the contaminated sample in Mexico, it doesn't necessarily mean the source of the outbreak occurred there. The jalapeno was found at a distribution center in McAllen, TX and because fresh produce goes through many processes and human hands, the contamination could have occurred in a number of places, at any level of the distribution chain.

The produce distribution center, Agricola Zaragoza, is working with the FDA to voluntarily recall jalapeno peppers the company distributed since June 30.

Serrano peppers were considered an outbreak culprit a few weeks ago; the FDA detained and refused an entry of serrano peppers from Mexico in which Salmonella – but not the type linked to this outbreak – was detected.

The agency is advising consumers to avoid raw jalapeno and serrano peppers and foods that contain them, including salsa and pico de gallo. Peeling and washing peppers will not get rid of Salmonella contamination and cooking could result in cross-contamination. In other words, avoid jalapeno and Serrano peppers altogether—for now.

More TOMATO SALMONELLA News
All food providers, including restaurants and retailers, have been told not to sell or serve raw jalapeño peppers, should avoid handling them, and should discard them.

Meanwhile, we can go back to eating tomatoes—all kinds. On July 17th, the FDA lifted its tomato salmonella warning against eating raw tomatoes, stating that "fresh tomatoes now available in the domestic market are not associated with the current outbreak". As a reassurance, tomatoes that were coming into season at the outset of the outbreak are extremely unlikely to still be in the supply chain. The agency has given the green light to any type of tomato, including the raw red plum, raw red Roma, and raw red round tomatoes that had been included in the now-removed warning.

If you have suffered losses in this case, please send your complaint to a lawyer who will review your possible [Tomato Salmonella Lawsuit] at no cost or obligation.
Request Legal Help Now