It was 10 years ago this month that Swissair Flight 111 bound from New York to Geneva plunged into the ocean off sleepy Peggy's Cove in Nova Scotia, killing all 229 people on board. The investigation into the plane crash took some 19 months, and five years before a final report was issued, issuing 23 recommendations to prevent a similar plane crash from happening again. 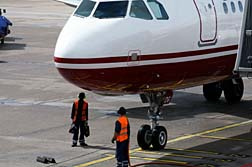 Today, only a handful of those recommendations have been implemented by the airline industry. Advocates to the airline industry, including some of the very investigators involved in the Swissair investigation, cite that flying today is safe, and even more so than September 2nd, 1998 with the wide-bodied McDonnell Douglas MD-11slammed into St. Margarets Bay traveling at 348 miles per hour.

However, critics take a different view. They're concerned about aging aircraft wiring. And they fear that in spite of the lessons learned from Swissair flight 111 and the $60 million spent on attempting to find out what went wrong and the recommendations that ensued, a crash like the one that occurred off the eastern coast of Canada could happen again.

Peggy's Cove is a lovely spot; a sleepy little fishing village that's really a trip back in time, with a lighthouse at the shore and a harbor full of fishing boats sprinkled amongst the quaint frame houses—houses that literally shook when the plane hit the water nose-first and instantly broke up into a million pieces, some no bigger than the handset of a telephone. The 229 people on board, less than an hour after takeoff from JFK International Airport, didn't have a chance.

All because of an arcing wire that ignited highly flammable insulation to the right, and above the cockpit. That started an electrical fire that quickly spread, shutting down vital electrical systems—including the black boxes. It wouldn't be long before the pilot had no control over the aircraft.

The Transportation Safety Board (TSB), the Canadian equivalent of the NTSB in the US, put the blame on thermal acoustic insulation blankets covered in metalized terephthalate (MPET). The so-called MPET insulation was found to be highly flammable, and the most stringent recommendation by the TSB was the removal of the offending material.

It has been reported that airlines have, indeed, complied.

However, that's just one of 23 recommendations pertaining to aircraft wiring, and other potentially flammable insulation.

Ten years after the Peggy's Cove air crash, there is still more that needs to be done.

It can be assumed that newer aircraft—those built since 2003, when the Swissair crash report was issued—have benefited from fresh insights, and built with newer wiring and less-flammable materials. Perhaps, even smoke detectors in the cockpit, something that, incredibly, the MD-11 plane lacked.

However, what of older aircraft? It's one thing to seek out, and remove problematic insulation. But what about wiring? There are miles of wiring snaking through each aircraft. One can imagine the cost of ripping out all of the old, and replacing it with new. Faced with the current high cost of fuel, and with profits shrinking, airlines would be hard-pressed to undertake such a massive, and costly retrofit.

For most, it's cross your fingers and hope nothing happens.

Oddly enough, the Federal Aviation Administration (FAA) buys into that very philosophy, according to Jonathon Seymour, a member of the TSB board.

"The FAA has adopted an approach called 'in-service failure,' " said Seymour. "In other words, something has to fail first before you actually go and test it. And if it fails the test, then you take it out, which may work to a point but doesn't alter the fact there may be some residual risk there."

In contrast, the TSB recommends that a testing regime be established to evaluate if aircraft wiring could fail under realistic operating conditions.

"It's frustrating that we're still that far away from where we might want to be after 10 years."

A memorial sits across from the lighthouse at Peggy's Cove, to honor the 229 people who died in that horrific plane crash. The plane no longer sits on the ocean floor in pieces, baby bottles and toddler's shoes, and backpacks no longer float along the surface. But the memories remain—as does thousands of miles of wiring that has endured the vibrations, and the rigors of thousands of hours in the air serving aging aircraft.

One would hope a disaster that befell Peggy's Cove wouldn't repeat itself. However, as safe as flying continues to be, according to the TSB's Seymour, not nearly enough has been done by the airline industry to stem a repeat performance.
READ ABOUT PLANE CRASH LAWSUITS