A lawsuit filed by three IBM sales technicians in July last year charged the company with violations of federal and California state overtime laws. The focus of the workers' complaint was IBM's classification of their jobs and those of other non-managerial workers as exempt from the overtime provisions of the federal Fair Labor Standards Act (FLSA) and of California labor law.

In the past, IBM has had to shell out millions in settlement money in similar overtime law violation cases, including $65 million in 2006 in a class action involving 32,000 current and former employees. In recent months, IBM has been under siege from lawsuits filed by workers such as the three sales technicians who claim to have been illegally classified as exempt. This week, seeking to avoid prolonged litigation and more costly settlements, IBM took a different tack in responding. 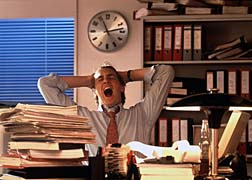 Internal company documents state, "To avoid protracted litigation in an area of law widely seen as ambiguous, IBM chose to settle the case—and to conduct a detailed review of the jobs in question." IBM's way to "settle the case" took effect on February 16, reclassifying 7600 workers from "exempt" to "non-exempt", making them eligible for overtime pay under FLSA, which requires time and half after 40 hours of work per week, or under relevant state labor standards.

Sounds good, except... the "detailed review of the jobs in question" consists of "a 15 percent base salary adjustment down across all units with eligibility for overtime". IBM claims that they will not save any money by cutting these workers' base pay by 15 percent, since they will be able to make it up via overtime work; on the other hand, they apparently don't plan to pay them much more than they already make.

More News
Along with the pay cuts, IBM plans to lobby for special exemption from overtime thresholds for information technology companies like themselves. They say that "aspects of the wage and hour laws have not kept pace with the realities of the modern workforce." Those "realities", of course, can include outsourcing jobs to low-wage countries—the "race to the bottom" that globalization has spawned.

One affected worker told the Associated Press, "I was so angry I could hardly speak, and it takes a lot to make me angry. I just don't know how IBM expects us to take this and just run with it."

Another commented to Information Week, "As one of the affected workers, it was all I could do to hold my tongue as our manager told us of this in a meeting this afternoon. You could have heard a pin drop in the room after this announcement. We were all stunned... ANOTHER 15 percent on top of already low pay? It's disheartening to say the least. I'm sorry, but when did the price of my consumables go down 15 percent?"