It's a case of consumer fraud that allegedly involves not only a misappropriation of funds, but indecencies to human remains. Since alleged wrongdoings at an historic Chicago-area cemetery were revealed, the cry has gone out for better consumer protection inherent with the burial industry and now, these issues at Burr Oak Cemetery have gone beyond the consumer fraud act: the FBI is now involved. 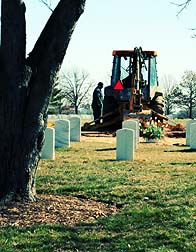 According to a series of reports published in the Chicago Tribune, five employees of historic Burr Oak at Alsip were arrested and taken into custody July 8th after authorities learned that numerous bodies had been dug up and dumped. The newly empty grave sites were then illegally resold.

The horror of the purported crime was revealed earlier this month when detectives discovered a collection of bones from more than 100 decomposed bodies laying above-ground and uncovered in an overgrown, fenced-off portion of the cemetery.

Various families have already filed lawsuits and class-action efforts are being investigated. As well, there had been reports of financial mismanagement prior to the cemetery being acquired by Perpetua Inc. in 2001. The Burr Oak Cemetery is currently closed to the public, but is expected to re-open at the beginning of August.

Leading up to this latest revelation the cemetery, which is home to the remains of activist Emmett Till and blues legend Dinah Washington, complaints were drawn over poor maintenance.

Meanwhile the Chicago and Northern Illinois Better Business Bureau told the Tribune that it had given Burr Oak its lowest rating—an F—for what it said was the cemetery's failure to address customer complaints, including missing headstones, dating back to 2007.

More CONSUMER FRAUD News
According to the July 9th issue of the Tribune authorities stated they believed the gravesite scam had been going on for about 4 years. The alleged scam involved the re-sale and re-use of existing plots so that cemetery records would not reflect a change in the number of vacant lots.

Forensic efforts are now unerway to establish conclusive identities for the exhumed remains.

Consumer fraud is damnable at the best of times and often proves a financial hardship for those with limited resources. However, alleged fraud characterized by this story puts the consumer fraud act—and consumer protection—to the test.