Consumer Fraud: You Are Getting Sleepy…

A hypnosis enterprise that failed to include a disclaimer regarding the effectiveness of its services has been rapped on the knuckles for committing consumer fraud by the office of the Vermont Attorney General.

At issue was the marketing strategy utilized by a network of businesses that offered hypnosis therapy for weight loss and smoking cessation—two of the great maladies of North America that prove to be near-impossible challenges for people. Many consumers turn to hypnosis, and hypnotherapy, after other attempts to shed the pounds or give up the weed, have failed. 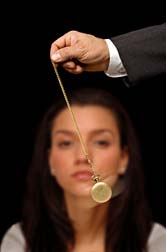 However, like everything else there is no guarantee that hypnosis will work—and while it has proven effective for many, it may not work for everyone.

This fact should have been included in the defendant's marketing materials, however it wasn't. Thus the Attorney General for the State of Vermont, William H. Sorrell cited Positive Changes Hypnosis Corporation (PCH) for failing to disclose in local advertisements that the therapeutic results for specific individuals were not typical of what other consumers could expect to achieve.

The testimonial ads promoting the PCH affiliate in Montpelier used the classic testimonial format, and pictured a man or a woman extolling the virtues of PCH and articulating some of the positive results achieved.

"I stopped smoking and lost 23 pounds!"

"I quit smoking after my first hypnosis session. My weight loss was easy, too. No stress, no fuss!"

The ads, which appeared in the Barre-Montpelier Times Argus throughout 1999 and 2000 and included at least 80 insertions during the summer of 2000 alone, failed to mention that individual results might vary.

That's a very big omission, according to the Attorney General and the statutes of the Federal Trade Commission (FTC). The latter knows only too well that an advertisement which describes the experience of a particular person is, given human nature, typically interpreted by the reader as representing every client's typical experience. According to the FTC, therefore, given the lack of adequate factual substantiation for an implied claim of typicality, the advertiser has the responsibility to disclose in a clear, and conspicuous fashion what the generally accepted performance would be in the representative circumstances, or state specifically the limited applicability of the advertised experience against what the consumer can expect to achieve.

In other words, according to the FTC, when we see an ad that says, "I lost 23 pounds!" we automatically assume that we can too, unless the advertiser tells us otherwise. That's just human nature—we fall for it hook, line and sinker. Unless there's a disclaimer attached which refers to the limitations, the FTC has concluded that we can assume the result applies to us.

And for that, an individual has the right to sue for misrepresentation.

More CONSUMER FRAUD News
It is not clear how many lawsuits have been launched against the PCH enterprise in the years since 1999, when the allegedly misleading ads began to appear. However the Office of the Attorney General in Vermont took action based on its own observation that there was no reasonable factual substantiation for the typicality of the advertised results for PCH, and the lack of any accompanying disclosure relating to the fact that advertised results would, or could not be typical.

While not admitting to any wrongdoing, PCH and its two principles agreed to pay the State of Vermont $20,000 in civic penalties and costs.

"The fact that one consumer has had success with a product or method does not mean that others will," Attorney General for Vermont William Sorrell said in a statement.

"The best advice is to use common sense and ask lots of questions."

And if you are sold a bill of goods—fight back in court.

Posted by
Maheen Fatima
on March 18, 2019
For a long time, hypnosis has been a popular point in the entertainment business. While it is described as a sleep-like state and it is expressed as a state characterized by focused attention, extreme suggestibility, and heightened imagination. In other words, it is like a day-dreaming phase.

Posted by
cheryl mcclellan
on September 27, 2017
I was a positive changes client a few years ago, paying in full when I signed up. After a few sessions I told them I WAS NOT BEING HYPNOTISED. I repeatedly told almost everyone there it wasn't working I was not "going under". Every single one of them told me I was. I think they had a standard answered. I finally gave up and quit going. They should be held accountable.
Posted by
Kathy Angvik
on May 1, 2017
I have fully paid for a membership at Positive Changes. $3,200+ The offices have now closed with no explanation. I am still owed hypnosis sessions, CDs and counseling. I want to be reimbursed for services owed.