Bank Conspired with own Customers in Scheme

In a conspiracy that involved the officers, employees, and some customers of Sterling Financial, an internal investigation has uncovered that the fraudulent scheme cost the financial institution $200 million. Also investigating the scheme are the Securities and Exchange Commission as well as the U.S. Attorney's office in one of the biggest bank frauds in Lancaster history.

The Lancaster-based institution's investigation uncovered that Equipment Finance (EFI) senior officers committed the fraudulent scheme with the help of a number of Equipment Finance employees as well as other third parties and various customers, according to documents filed on February 11, 2008 with the SEC. 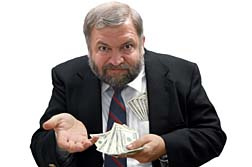 The two officers involved in the scheme are the executive vice president of EFI, Michael J. Schlager and the chief operating officer of EFI, Joseph M. Braas. Both men were fired by Sterling after the fraud was discovered. Three other employees were also fired as a result of the scheme.

The SEC document contains additional details regarding the fraud provided by PNC Financial Services Group, based in Pittsburgh.

PNC is seeking to purchase Sterling in a $565 million transaction.

As for the filing by the SEC, the fraud had a major impact on financial results for sterling in 2006 and 2007, and is having an effect on the prospective acquisition of Sterling by PNC. These details have an impact on which executives currently working for Sterling will be joining PNC and the amount in salaries that PNC will be paying these employees.

The CEO of Sterling, J. Roger Moyer Jr., will receive the highest salary at around $2 million.

The fraud that occurred involves EFI, which was acquired by Sterling in 2002, loaning money to logging companies wishing to buy new heavy equipment. The investigation conducted by Sterling uncovered that those who perpetrated the fraud compromised the entire loan process by hiding credit delinquencies and placing false information on financing contracts. There was no evidence that the managers of Sterling participated or even knew about what was going on.

Once the fraud was discovered by Sterling, the company hired a forensic accounting firm and a law firm to assist in figuring the extent of the losses.

Meager details are included in the 200-page SEC document related to the investigation.

However, although it is not mentioned in the document, an interview was conducted with at least one customer. There have also been hundreds of thousands of documents reviewed as well as reviews of loans issued by EFI dating back to 2002.

Class action lawsuits have been filed by Sterling shareholders in the U.S. district court, stating that the officials at Sterling should have had knowledge about the financial condition of the company. Other banks have also filed lawsuits against both Sterling and EFI, in hopes they can receive reimbursement on the EFI loans that they purchased.

More News
It was on Monday that Sterling made public the amount of losses as a result of the fraud. Sterling has stated that last year's quarterly financial reports are delayed because of the investigation and that the net loss between January 2007 and September 30, 2007 was $7.5 million. The firm believes that the fourth quarter will reveal an additional net loss of $2 or $3 million.