Many women who took Zofran during their pregnancy had idea that it is prescribed “off-label”, meaning it wasn’t approved by the FDA to treat morning sickness. 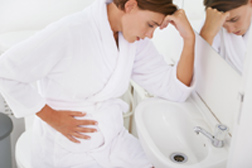 Most women who are prescribed Zofran only take it in their first trimester (50-90 percent of women experience some degree of nausea during early pregnancy) and only for a few days. But morning sickness can be debilitating and even dangerous for a small percentage of women, so they continue with the drug throughout their pregnancy.

Marquita Smiley took it a few times a week into her second trimester, reported the Birmingham News (June 1, 2016). In her fifth month she had an ultrasound that showed the baby’s heart was underdeveloped. Just days after her son was born he had open-heart surgery and at two months of age he had a heart transplant. Miraculously, he pulled through. When Smiley saw a TV ad claiming that Zofran causes heart defects, she filed a lawsuit against GlaxoSmithKline (GSK). Had Smiley known of Zofran birth defects, “I would not have placed him at risk,” she told the newspaper.

• Marketing Zofran “off label” as a safe and effective treatment for the very common side effect of a normal pregnancy - pregnancy-related nausea and vomiting - otherwise known as “morning sickness.”

• Marketing Zofran during this time as a “wonder drug” for pregnant women, despite having knowledge that GSK had never once undertaken a single study establishing that this powerful drug was safe or effective for pregnant mothers and their growing children in utero.

• Burying any internal analyses of Zofran’s teratogenic potential because they would have hampered their marketing of Zofran and decreased profits by linking the drug to serious birth defects.


More than 300 families have sued GSK over birth defects they believe were caused by prenatal exposure to Zofran, and attorneys are expecting many more claims as more parents become aware of Zofran birth defects. For instance, Lisette recently filed a claim with LawyersandSettlements - she took Zofran throughout her entire pregnancy.

“My baby boy was born with a hole in his heart, respiratory problems and jaundice,” she says in her complaint. “He was on a breathing/life machine and they even had to do a spinal tap to see what was going on because he was so sick.” Lisette doesn’t know why her son was born with birth defects, but she suspects Zofran.

Posted by
Timothy Hopkins
on August 21, 2016
What about those like me who have suffered a life due to thalidomide for 50+ years with no compansation.. where's my justice