The scandal over Merck/Schering-Plough's long delay in releasing the results of the ENHANCE tests of its big-bucks anti-cholesterol medication Vytorin continues to grow—to the extent that The Wall Street Journal now calls it "Vytoringate". And like its predecessor scandal, the focus of investigations has come down to a simple question: What did Merck/Schering know about the ENHANCE results, and when did they know it?

To recap, the ENHANCE test results were finally released after nearly two years on January 14. They indicated that Vytorin, a combination drug containing Merck/Schering's Zetia and generic simvastatin (Zocor), did lower LDL (bad) cholesterol somewhat better than simvastatin alone, but was no better than simvastatin at reducing arterial plaque buildup. And arterial plaque is the prime cause of heart attack and stroke. And Vytorin costs three times as much as generic simvastatin. Sales of Zetia and Vytorin were critical to Merck/Schering's financial bottom line, bringing in as much as $5 billion a year and driving the companies' recovery from past losses. 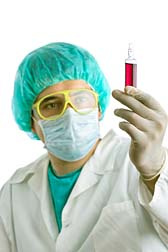 So what did top management at Merck/Schering know and when did they know it? More to the point, what did they do with what they knew? That's something that House and Senate investigators, and more recently, the attorneys general of New York and Connecticut want to find out. They're especially concerned about Merck/Schering's marketing practices and, increasingly, about stock sales by high-ranking management.

Merck/Schering claims that their top execs only received the ENHANCE results in January, a few days before they were made public. However, Ed Silverman of the Pharmalot blog presents evidence from March 2007 that the results were well known within the companies at least that early—one anonymous insider posting says simply, "Have a buddy at SPRI [Schering-Plough]. He says that the [ENHANCE] study is a bust. Adding Zetia to already maxed-out statin is useless" in preventing heart attacks.

If this information was widely known within Merck/Schering, why then did they continue running television advertisements hyping Vytorin as the best option for consumers concerned about reducing stroke and heart attack risk?

New York state Attorney General Andrew Cuomo wonders the same thing in a statement released on January 28: "We will investigate and, when appropriate, hold accountable drug companies for engaging in irresponsible and deceptive conduct and any deceitful marketing of prescription drugs. Drug companies are on notice that concealing critical information about life-saving prescription drugs, profiting at the expense of patients' health, and wasting taxpayer dollars, is simply unacceptable."

Those taxpayer dollars, by the way, come from everybody, not just people who had to pay for Vytorin or Zetia. Connecticut Attorney General Richard Blumenthal says he wants to know if state Medicaid funds were spent on "false assurances about the safety and effectiveness" of Vytorin and Zetia in reducing heart attack and stroke risk. Those are your tax dollars.

Speaking of dollars, Merck/Schering's management came across a lot of them last year. Carrie Cox, Schering-Plough's president, unloaded $28 million of the company's stock in April and May 2007. Her fellow execs Thomas Sabatino, Brent Saunders, and C. Ron Cheeley, did much the same around that time. If they knew about the ENHANCE results at this time, their stock sales look a lot like illegal insider trading.

What about Merck/Schering's claim that they only knew the ENHANCE results in January? If we read their statements carefully, we find that what they learned then was the "unblinded" results—that is, which of the test patients received Vytorin and which received simvastatin alone.

How important is this? Not very, according to Dr. Allen Taylor of the Walter Reed Army Medical Center. He says that someone who examined the "blinded" ENHANCE test data "could know that a groupwise comparison of CIMT changes showed no statistically significant difference. In my view, once that is known, the trial is functionally unblinded."

More News
Similarly, a Schering-Plough employee writes in an open letter to Fred Hassan, the company's CEO, "I do know something about the running of clinical trials and although I don't have direct experience in monitoring them, I do know that even blinded results can, and often do, reveal a lot about a study."

The same employee pleads, "Mr. Hassan, you were a hero to me and I sincerely want to believe in the dream of the New Schering-Plough. The silence of Ms. Cox and the ambiguous press releases that seem to be carefully drafted by lawyers is hurting mine, and many of my colleagues, belief in the core values of our company, and sadly, sir, in you personally. You send us many e-mails and we are all very grateful that you take the time to communicate with those lower down the totem pole. Please take the time to send us an email that answers these questions in plain language and helps to restore the faith of SP's excellent workforce in you."

He may have a very long wait.