Were you looking for Statins lawsuits?
Zetia, an anti-hyperlipidemic drug, is prescribed to treat high cholesterol. Since its FDA approval in 2002, serious Zetia side effects have been reported, including Zetia liver and Zetia heart attack problems. These Zetia problems have led to a number of Zetia lawsuits. Zetia is also used in conjunction with statins to lower cholesterol, but it has also been linked to statin side effects, and long-term use can result in statin cardiomyopathy.

Send your Zetia claim to a lawyer who will review your claim at NO COST or obligation.
GET LEGAL HELP NOW

Clinical studies have shown that Zetia ((known generically as ezetimibe) can effectively lower cholesterol, but the long-term side effects may prove that the risks outweigh the benefit. This anti-hyperlipidemic drug works by blocking the absorption of cholesterol in the small intestine and it is sometimes used along with a statin drug when statins alone cannot lower cholesterol levels. 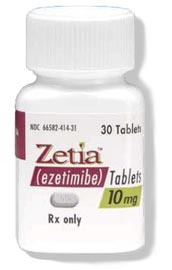 Merck and Schering-Plough have marketed both Zetia (which works in the digestive tract differently than a statin) and Vytorin—the latter is a combination of Zetia and a statin. Taken in combination with a statin, Zetia has been linked to a number of serious side effects, including myopathy (muscle pain); rhabdomyolysis ( a disease that destroys or degenerates skeletal muscle tissue); liver problems-- liver enzymes may become elevated, which can lead to irreversible liver failure—and statin cardiomyopathy. A 'Dear Doctor' letter was issued by Health Canada in 2005 warning that Zetia is associated with adverse side effects. No letter of warning was issued in the United States, nor did FDA require Merck and Shering-Plough to do so. Those side effects include: In December 2007 the New York Times reported that Merck and Schering-Plough had conducted a number of Zetia studies that indicated the possibility of Zetia causing liver damage when used long-term with other statins. The drug companies, however, chose not to publish the results of those Zetia studies.

Up to seven percent of statin users experience muscle problems, and if a higher dose is prescribed, or a statin is prescribed with Zetia, that statistic rises to more than 10 percent. Recent medical studies have shown that long-term use, and higher dosage use of Zetia combined with statins may result in statin Cardiomyopathy.

Cardiomyopathy is a serious weakening of the heart muscle, characterized by the heart' inability to pump blood and normally attributed to a reduced supply of oxygenated blood to the heart. It is a known adverse side effect of statin therapy and often goes unreported.

Researchers have recently found that statins, and statins combined with Zetia, activate atrogen-1, a gene signal in muscles. When this gene is activated, it drives the process of muscle destruction and degeneration, including the cardiac muscle in failing hearts.

Ironically, the drugs that are prescribed to lower cholesterol and prevent heart problems may indeed be the cause of heart failure.

Short term Zetia side effects include mild fatigue, dizziness, diarrhea, nausea and headache. Zetia can also cause allergic reactions, and it has been linked to gallstones or inflammation of the gallbladder.

In August 2009 pharmaceutical manufacturers Merck and Schering-Plough (now merged into one company—Merck and Co.) agreed to settle a number of Vytorin and Zetia class action lawsuits that claimed the drugs are unsafe and ineffective. Merck and Schering-Plough have been charged with consumer fraud against both Zetia, and have faced over one hundred Vytorin-Zetia class action lawsuits.

A $41.5 million settlement of class action lawsuits related to claims against their shared Vytorin-Zetia drugs has been reached; the settlement resolved approximately 145 lawsuits pending in federal court in New Jersey filed by Vytorin and Zetia consumers and insurers that seek economic damages related to the purchase of the cholesterol drugs.

However, a Department of Justice investigation is still pending, and attorneys are currently evaluating Zetia claims.

If you or a loved one has suffered heart problems due to taking Zetia, please click the link below to send your complaint to a lawyer to evaluate your claim at no cost or obligation.
Please click here for a free evaluation of your Zetia claim
Last updated on Apr-13-11

Zetia and Vytorin Continue to be Controversial

Washington, DC: There is little doubt that the cholesterol-fighting drug Zetia (ezetimibe) has travelled a rocky road since it was first approved by the US Food and Drug Administration (FDA) in 2002. And while several years have passed since the controversial delay in releasing study results into potential Zetia side effects, issues involving Zetia and its cousin Vytorin (Zetia in combination with a statin) continue to lazily percolate like water at a gentle boil.READ MORE
Vytorin Has a Complex History

The new study on Vytorin may be out, and it may signal good news for its drug maker, but as far back as 2008, there were serious concerns about how Merck and Schering-Plough planned to study potential Vytorin side effects. Concerns were so high that on March 31, 2008, Senator Chuck Grassley sent a letter to Merck and Schering-Plough outlining his worries.READ MORE
Merck Pushes Positive Vytorin Results

As more information on a recent Vytorin study is released, Merck has continued to tout the positive findings of that study. Vytorin side effects have been at the heart of Vytorin lawsuits, alleging patients were put at risk of health problems due to their use of the drug.READ MORE

Posted by
mary ann
on April 24, 2018
Was on zetia just a couple days, had severe diarrhea, cut the pills in half. About four weeks later started having eyes issues. Eyes felt tired and itchy all the time. Then started seeing flashes of light. Went to eye doctor to check and make sure no optical nerve damage. Don't think it was a coincidence. Will not continue zetia.
Posted by
Margaret Disney
on December 2, 2017
I took these tablets in UK they are named Ezetrol. After about two week, one morning I awoke and both hands were stiff swollen and painful. I stopped taking the tablets a year ago but still have swelling, stiffness and pain and 2 ??? trigger fingers . 1 index finger on the right and ring finger on the left.

Has anybody else suffered just in the hands.

I have also felt weary most of the time. I also have cramp in my calves.

I suffer from AF ,I am diabetic type 2, and high blood pressure. Should I be taking these tablets.

if you are able to answer my queries I woild be grateful.

Posted by
lucinda reyes
on September 3, 2017
I have been taken zetia for a few months now maybe a year. I have had terrible muscle problems since then.its hard for me to even walk.I have edema in my legs and also burning pain.I also have had chest pain and stomach problems.I take tricor along with zetia.going to get opinion from doctor this week.I have 15 heart stents.
Posted by
beverly lane
on July 7, 2017
have been on zetia now for about 2 weeks. low dose as I have tried every other drug and I have bad muscle pain in my legs. doc wants me to try zetia but every thing I read scares me to death!! I have had double bypass and 2 stents since 2000. my bypass was not from a heart attack but had a echo done from taking a weight loss drug and they found 2 main blockages and took vein out of leg to fix! was told they didn't know how I had lived for 47 years. I don't think I,m going to take it any more. as I have enough problems without that.
Posted by
Kentuckian 58yearsold
on June 27, 2017
Have been taking Zetia generic for 4 weeks. Have had 2 episodes of chest pain. Though I was having a heart attack! Previously was on Creston. It gave me aches and pains, mental fogness, felt like a 90year old man. I may just have to take my chances with cholesterol.
Posted by
Fenella Gill
on June 7, 2016
after six months on ezimitibe I could not walk, ha dmuscle spasms especilly in thighs hips legs, had also tightness of chest, sleep problems, breathing problems waking from sleep, anaemia,cvough muscle tendeness and weakness - read about side effects after siz months and stopped taking it- within a dew days nociced huge reduction of pain and abilit towalk better- outraged that this could happen- doctor didnt tell me of side effetcs even though I am known muscle pains from statins
Posted by
Shannon Hanagriff
on January 20, 2016
Zetia causes BAD HIP PAIN,Bad LIVER Problems,and HEART ATTACKs// MEDICATION MUST Be REMOVED FROM MARKET // It was revised in Jan.2012 B.S.//NEW CLASS ACT NEEDS TO OPEN!!
Posted by
Cvita
on August 15, 2015
Since I started taking z etia a few weeks ago I have had numbness in my legs..bad diarrhea. .been to the hospital for chest pain and very tired..I already have heart disease before I started taking z etia and I'm scared to continue to take it..I was never told of these side effects ..I just googled the medication cause of the way I was feeling..advise patients NOT to take this..it's too many side effects. .
Posted by
California
on November 21, 2014
After being prescribed Zetia with in the first year, I developed occasional stomach problems, which continued to progress in severity as well as frequency to almost daily following any meal larger than a snack. During this time I saw my Dr. numerous time for this condition until I was on vacation in Hawaii for 3 weeks and ran out of Zetia. After about a week without Zetia, I began to not have issues with eating and after 2 weeks I had no issues at all, and when I got home I called the Dr. and shared my finding and he promptly took me off Zetia!! For about a year, I had no stomach issues at all; however, in the last year the symptoms have returned and are now back as bad as before. Now I have been diagnosed with Exocrine Pancreatic Insufficiency.
Posted by
Texas
on January 28, 2012
Spent the morning in te ER scared I was going to die. I have only been taking this medicine for about 3 weeks, so long-term damage is unknown as of yet.
Posted by
Washington
on October 27, 2009
In the fall of 2005 I experienced a severe case of rhabdomyolosis while taking Zetia. This involved kidney failure and severe complications. I now have a 40% loss of my kidney function and possible liver impairment. I have heart disease and have had heart attacks in 2002 & 2008.
Posted by
Florida
on January 16, 2008
Advanced CAD that shut down my right side completely, in 12 months it went from 40% to 100%. This after a complete life style change to low fat diet. Shocking
according to the doctor treating me. I had heart attack 9/2006 put on Zetia along with lipotor, had 2nd heart 12/2007. The doctors could not explain the rapid advancement, they can now! ZETIA.
Posted by
Florida
on January 15, 2008
Out of work and on permanent disability, liver test, tremors, muscle pain, and developed an allergy to pain medication. I must now live with constant pain.
Posted by
Ohio
on January 15, 2008
Arteries clogged further. Instead of improving, damaged my health. Ending in heart infraction/attack. Time off work, pain. Eventually lost my job and suffered financial, emotional, and related consequences. It happened in 2004 so statute of limitation may apply. There was no proof at the time but todays reports proofs my point that Zetia may in fact bring on heart problems instead of curing it. In my case it certainly clogged my arteries further instead of clearing them.
Posted by
California
on January 14, 2008
Muscle pain & joint pain & sometimes I can't even walk. Edema (I notice it especially in my hands, but also feel it in my eyes and face). I am in "acute renal failure" due to "acute tubular necrosis" secondary to Rhabdomyolysis.