Charles S. says he is annoyed by Zetia. The problem is that within days of taking the drug, he experienced extreme muscle pain—pain that required steroids for relief. Charles has no doubt that the cause of his muscle pain was Zetia.

"I was requested to take Zetia for cholesterol control, of course," Charles says. "So I did start taking it. I'm not sure how much I took but I took it for a week and a half, two weeks at most. Shortly after I started taking it, I started developing muscle pains. The muscle pains increased to the point where I got the pains in both my arms and my legs. It got so painful that for three or four days I could hardly walk. My arms were so touchy and painful that I could hardly change my socks. It's one of those things that you like to do for yourself, but I just couldn't handle changing my socks. It was uncomfortable. Actually, it was a lot more than uncomfortable." 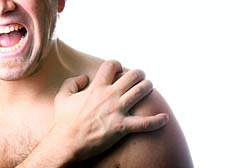 "I think they gave me some super Aspirin for pain, which didn't do much," Charles says. "Eventually I was referred to a rheumatologist. By that time, the pains in my legs had decreased a little bit, my hands and fingers were swollen and looked like a package of weenies. They were sore but not unbearable. My arms were still sore and I didn't want to put up with it."

The rheumatologist put Charles on some steroids for six months, which relieved his pain. While he took the steroids, the pain gradually diminished and became less constant, to the point that the pain was manageable.

More News
"I was more than a little annoyed by the situation because of the shape my legs and arms were in. I could barely do any yard work that summer. It was very painful. Sometimes I could hardly walk. It's doubly irritating because I have a handicapped wife who had a stroke and needs help. I was not happy about the situation at all."

Charles started taking Zetia in January 2006, and says it was only a couple of days before his muscle pains began. It was another four months of constant, substantial pain before doctors put him on steroids. Now, a year after he stopped taking steroids, Charles still feels some pain, although it is a lot less than it used to be.

"Nowadays, just a very little bit of pain," Charles says. "Most of the time there's a little there, but it's at least tolerable.

"I think that this sort of thing should be publicized," Charles says. "There doesn't seem to be enough information out on this sort of thing. I remember reading that Zetia was approved over the objection of their [the FDA's] researchers. I'm really annoyed about the whole thing."