Zetia: So Many Questions, So Few Answers

In the five years since cholesterol drug Zetia has been on the market, millions of Americans have embraced Zetia to help them control their cholesterol levels. And yet, the safety of Zetia, and specifically concerns surrounding the potential for liver damage has been suspected for some time.

In fact, prior to Zetia gaining US Food and Drug Administration (FDA) approval in 2002, one FDA reviewer recommended that Zetia not be approved due to findings that Zetia, when combined with statins, caused liver damage in animals.

Further, Zetia use has allegedly not proven to lower the risk of heart attack or stroke on its own, which most cholesterol drugs are designed to do. 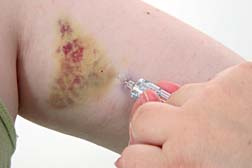 Clinical trials and other published studies conducted by the manufacturers, Merck and Schering-Plough, involved a fairly small sample of trial participants (3900) over a 12-week period. The results failed to ring the alarm bells.

But those bells are ringing now, and the source of the clanging is a series of unpublished studies, conducted as a safety test by the manufacturers from 2000 to 2003 and lasting, on average, a year. Experts say that these longer studies are important in determining the risk to the liver, which cannot be adequately determined in a typical trial lasting 12 weeks.

Those studies, as well as another long-term study known as Enhance, may yield concerns related to the potential for risk to the liver.

The Enhance study was completed last year, but the results are not expected to be released until March. While results of the Enhance study have yet to be published, it is known that some study participants were dropped after it was revealed they presented with elevated liver enzymes, an indicator of liver problems.

Industry watchdogs are criticizing Merck and Schering-Plough for not releasing the data before now, suggesting that its contents may reflect poorly on Zetia, in terms of benefit versus risk.

For its part, the manufacturer is verifying the existence of the unpublished studies, but is content with its position that the majority of patients have little difficulty tolerating the drug, according to a Schering-Plough spokesperson last week. In published comments, Dr. Robert J. Spiegel—a Schering-Plough executive—indicated the manufacturer did not feel the studies yielded sufficient scientifically significant data to warrant publishing.

The FDA is aware of the unpublished data, much of which is revealed through the FDA web site. And in spite of data suggesting concerns with regard to the liver, the FDA approved Zetia for use with statins in 2002.

This, in spite of findings which suggested that among Zetia patients, 11 times more participants developed health problems by taking Zetia with a statin, than those who were on statins only.

This, in spite of an FDA reviewer recommending that Zetia not be approved for use with statins, in view of the data available at the time.

This, in spite of regulators in Canada and Australia adopting much more aggressive safety warnings for Zetia, which include risk factors for hepatitis, pancreatitis and depression.

This, in spite of the emergence of incident reports in medical journals over the past two years, revealing severe liver damage in some patients on Zetia and statin therapy.

This, in spite of a lack of conclusive evidence that proves Zetia can reduce heart attack and stroke. Conversely, there is evidence that statins do, indeed, deliver such a benefit.

More News
Right now the FDA requires Zetia to carry a relatively mild warning regarding the potential for liver complications.

However, given the tough stance taken by Australia and Canada, together with the existence of unpublished data, a cloud of suspicion continues to build over Zetia.

Millions of Americans take Zetia. The question then remains...

Hopefully, the release of the Enhance study in early 2008 will provide the answer.