The Food and Drug Administration (FDA) said, on Friday (Jan 25, 2008), that they will review the safety and efficacy of Zetia/Zocor (Vytorin) after results from the ENHANCE trial suggested that the combination had no significant reduction in atherosclerotic-plaque progression.

Steven Nissen, M.D., director of cardiovascular medicine at the Cleveland Clinic, said in a press release, "This is as bad a result for the drug as anybody could have feared, Millions of patients may be taking a drug that has no benefits for them, raising their risk of heart attacks and exposing them to potential side effects".

Dr. Nissen added, that the ENHANCE trial results were stunning, adding that on the basis on this evidence there was no good reason to prescribe Zetia. 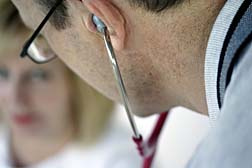 Dr. Howard Hodis, a cardiologist at the University of Southern California, also said he was concerned by the trial's results. "Clearly, progression of atherosclerosis is the only way you get events. If you don't treat progression, then you get events. Growth in fatty plaques is highly correlated with heart attacks and strokes". (Drug Has No Benefit in Trial, Makers Say. The NY Times, January 14, 2008).

The ENHANCE trial was designed to show that Zetia could reduce the growth of artery-clogging plaque. Patients in the trial took the combination of Zetia, which blocks absorption of cholesterol in the intestines, and Zocor, a statin available in generic form (simvastatin). The patients received the combination in the form of Vytorin pills.

The ENHANCE trial, lasted two years and covered about 720 patients with a gene that causes them to produce very high levels of low density lipoprotein cholesterol, (LDL or "bad" cholesterol). Patients in the trial had LDL levels of about 320 milligrams per deciliter at the beginning of the trial, which is about three times the level cardiologists recommend.

The study found that participants who took Zetia/simvastatin (Vytorin) experienced a 58% decrease in their LDL cholesterol levels, compared with 41% for those who took simvastatin. Yet despite the larger cholesterol reduction, plaque grew almost twice as fast in patients taking Zetia along with simvastatin, than in those taking simvastatin alone.

Merck and Schering-Plough, who jointly market Zetia/simvastatin (Vytorin), have been criticized by doctors, industry analysts and lawmakers for delaying presentation of results from the trial. According to the Wall Street Journal, the ENHANCE study, ended in April 2006, but the companies did not release the results until January 14, 2008 (Winslow/Wilde Mathews, Wall Street Journal, 1/26). The companies attributed the delay in the release of the results to efforts to ensure accuracy of imaging data collected during the study.

The release of data followed a letter sent to the drug makers by Rep. John Dingell (D-Michigan) in December. That letter alleged that the companies were intentionally withholding the results of the ENHANCE study, which had originally been slated to be reported almost two years ago. Dingell also asked the drug makers to respond to rumors that it attempted to "change the endpoints" of the trial.

Robert Temple, M.D., director of the FDA's office of medical policy, said there may have been some discussion about that but there was never a formal proposal to the FDA to change the endpoint. He stated that it would not have been allowed.

According to Dow Jones Newswires, Verispan, a prescription-data vendor, said Vytorin prescriptions last week were 23% lower than the week before the Jan. 14th release of the study. Zetia prescriptions were off 25%.

In an earnings statement released today, Merck said sales of cholesterol drugs Vytorin and Zetia totaled $1.5 billion in the fourth quarter, up 34 percent from a year earlier. These figures will undoubtedly raise suspicions about the motives behind the delay in the release of the study results.

Merck, also disclosed in its earnings statement that approximately 50 lawsuits have been filed against it alleging violations of state consumer-fraud laws and other claims in connection with the sale and promotion of the drugs.

The FDA said its investigation will take about six months, but that review will not begin until Merck and Schering-Plough hand over complete study data. According to John Jenkins, M.D., director of the Office of New Drugs at the FDA's Center for Drug Evaluation and Research, only the preliminary results were released on Jan. 14th. He added, "it could be two or three months before we receive those data," so that evaluation might not be completed until late this year.