It doesn’t take long to develop a blood clot as a result of taking Yasmin birth control. Barbara, age 27, only took the Yasmin pill for nine months and says she is lucky to be alive. 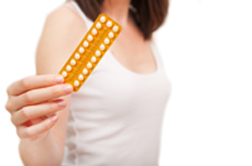 It started with a pain in her leg just six months after she started Yasmin, but it only lasted a few minutes so she thought it was just a cramp. But last November the pain hit again, this time so severe she couldn’t move.

“Imagine having the worst charley horse [muscle cramp] and multiply that by 50,” says Barbara. “I had to crawl on my hands and knees to the bathroom. About six hours later the pain subsided enough that I was able to drive to the hospital.”

When Barbara got to the ER she didn’t even stop at the administration desk - she was immediately wheeled to an ultrasound table and the first question the doctor asked her was whether she was taking a birth control pill. (If only every ER doctor knew about the link between blood clots and Yasmin side effects…)

“I had no idea what was going on,” says Barbara. “Didn’t I eat enough bananas? My mum always told me you get leg cramps from a lack of potassium. When they asked me if I was on Yasmin or Yaz, I started to cry - at this point I knew that I was in trouble. Thankfully the doctors seemed to know exactly what was going on with me. Almost an hour passed and I was still on the ultrasound table when a doctor told me that I had a blood clot in my leg.

“I couldn’t believe it - just a few hours earlier I was fine and healthy; I thought they must be mistaken. The doctor said I was not allowed to take any more Yasmin and I wasn’t allowed to drive. There was a whole laundry list of things I couldn’t do.

“I actually questioned the ER doctor because I specifically asked my prescribing doctor if I could ever get a blood clot after seeing a commercial on TV. He said that wouldn’t happen.”

Barbara now has a new doctor. Actually she now has a number of doctors, including a hematologist, an endocrinologist and an OB/GYN who specializes in women of reproducing age who have had blood clots.

Barbara is very lucky. The ER doctor told her that the blood clot hadn’t reached the deep vein point, so she gave her some pain killers and told her to call her husband and drive her home. She was taken off every medication and was told that she could never take a hormone medication again.

“My new primary doctor referred me to the OB specialist because things are more complicated now that I had a blood clot if I ever want to have another child - I have one son,” says Barbara.

“My OB doctor told me blood clots are common with Yasmin. We went over my history and what happened. She told me I have to see a hematologist because I am at the reproducing age. The hematologist also said Yasmin definitely caused the blood clot, without a doubt. He did blood work to rule out anything else. He told me that I had to take 325 mg of aspirin a day for the rest of my life, and if I want another child, it is important that we plan it and that I consult with him and my OB doctor, because I will need to give myself shots of lovenox in my stomach every day for my entire pregnancy and a few months after giving birth. Now I don’t know if we are able to have another child.

More YASMIN BIRTH CONTROL News
“I don’t think the drug company, Bayer, gives you the facts. People read the warning label but gloss over it, mainly because they are 10 pages long. First of all Yasmin and Yaz shouldn’t even be on the market. I thought about what would happen if it killed me and my unborn child. Fortunately my son is alive and well; I didn’t take Yasmin until he was six months old.

“I asked the hematologist what could have happened if I had gotten a blood clot while pregnant; what were the chances of killing me or the child. He said he has seen it happen very frequently as a result of Yasmin or Yaz - more so of the unborn child than killing the mother. That is very scary. And he also told me I can never take anything with drospirenone for the rest of my life.

If I can tell one woman something I didn’t know back then, it is this: Don’t get prescribed birth control from your primary doctor. It is better to talk to a specialist and go over the real facts. And they can warn you of the Yasmin side effects.

Posted by
Don
on March 23, 2014
so the gal was aware of the blood clot possibility. I am a male and aware of the potential blood clot issues with birth control pills, you see it on TV, and if you intend to take a substance DON"T "gloss over" the potential side effects, not everyone has those side effects, but YOU are warned yet CHOOSE to take it anyway
SHAME ON YOU when you sue when you did it to yourself!