Just Go Ahead and Try to Sue the Coast Guard

What happens if the Coast Guard miscalculates a critical piece of safety information and that miscalculation is implicated in an accident that resulted in the death of five people? According to a June 2009 decision by the Federal Court, the Coast Guard is immune from any financial liability. "I respectfully disagree with the court's interpretation," says maritime lawyer Robert Hopkins from the Baltimore firm of Duane Morris. 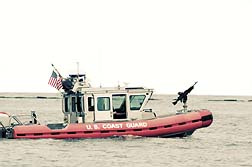 In 2004, three women, two men and a 6-year-old boy drowned when a Baltimore water taxi flipped in bad weather in the city's inner harbor. There were 25 people on board the pontoon water taxi —the maximum number permitted aboard that size and type of watercraft according to the rules and paperwork issued by the Coast Guard to the owner of the Lady-D.

"The owners of the boat and the insurance company made a real effort for these people to settle as quickly as possible," says Hopkins, who represents both the owner of the Lady-D and its insurance company.

During the course of the investigation, it was discovered that the Coast Guard miscalculated the number of people that could safely be on board the Baltimore Shuttle. There should have been no more than 15 people on board the vessel—and overloading of the boat was likely a key case of the accident.

"If it hadn't been for the overloading, which was the result of a mistake by the Coast Guard, this accident never would have happened," says Hopkins.

Not only that, the judge in the case noted that the Coast Guard inspector, who certified the Lady D's safe capacity level, had accidently used applied standards to the L-Day actually meant for another style of boat.

The court's decision to leave liability with the boat frustrated the boat owner and the insurance company that paid out large insurance claims despite the fact that the Coast Guard's misinformation no doubt played a role in the accident. Hopkins' clients felt entitled to recoup the money paid out in the settlement based on the premise that the overloading was the direct result of the Coast Guard's error.

More Wrongful Death News
Responsibility for the accident has been buffeted around the courtroom like a rubber dingy in high seas. The Coast Guard has blamed the captain of the Lady-D and a multitude of other factors for the disaster. However, the Federal Court ruling in June upheld an earlier lower court ruling stating that the Coast Guard cannot be sued in the Inner Harbor tragedy. It says that the Coast Guard falls under certain "discretionary duties" that make it liability-proof.

Robert Hopkins is a graduate of the University of Maryland School of Law (1988) and Trinity College (1985). He practices in the area of transportation law, product liability and commercial litigation both in the US and abroad. He is a partner at Duane Morris in Baltimore, Maryland.

Posted by
Sherry Richard
on July 7, 2016
My husband 50 foot shrimp flipped. And my husband was trapped inside. The sheriff department tapped on the side of the boat to see if there was any response. It took the coast Guard 3 hours to get there. NO one would go get him. The boat was about 100 yards from the dock. We waited 7 hours before they pulled his body out. I say there is no excuse for that... Yes, I do plan on suing all involved. Sheriff department, Some sh*tting so called Coast Guards and wildlife and fisheries. Does any one know how long it should have taken the coast guard to get there, not 3 hours i hope. I and my son begged them to go get him. And they said " We can not risk one life to save a maybe!!! Really.
Posted by
Alex
on August 1, 2015
I am not surprised. But worst than that is how they show favoritism when conducting search and rescue missions.

For example, like searching for two 14 yr old boys lost at sea, adrift, for 7 days, ignoring their 30 hour period of survival probability. Actually , while this search was going on, others were called off, even if those called off were on board and not adrift.

Everyone should be treated equally.