More WORKERS' COMP News
Edith Johnson, a 56-year-old bank teller, was denied workers compensation by the Workers Safety and Insurance board after a bank robbery left her emotionally unprepared to return to work. 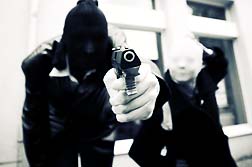 On May 26, thieves entered the Gilby bank where Mrs. Johnson worked, holding her at gunpoint and handcuffing her to the floor. This was the third robbery that had occurred at that bank during Mrs. Johnson's tenure, and the second at which she was actually present.

Bank officials filed claims for Johnson after she was diagnosed with post-traumatic stress disorder.

The claims were denied by the North Dakota's worker compensation agency in a letter claiming that state law does not cover a "mental injury arising from a mental stimulus," a distinction that attorneys for Mrs. Johnson argue was meant to apply to normal stresses arising from typical work responsibilities.

"To say that being handcuffed, placed face down on the floor and hav(ing) your life threatened by an armed robber is everyday stress at a bank ... that is absurd," attorney Tom Dickson tells the Grand Forks Herald. "I'm just astonished that WSI would fight this, but they are."