Volkswagen owners in Canada are so revved up over the German automaker’s blatantly deceptive and false auto emissions information that they have filed a $1 billion (that’s billion with a “b”) lawsuit against the company. 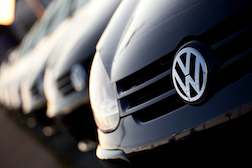 United States and European law firms have also filed against Volkswagen (VW); however, VW is a very popular brand in Canada and the Canadians have come out of the gate fast on this.

“There has been a lot of interest from Canadian VW owners in terms of getting a class action started and trying to figure out fair compensation. People are just shocked by the extent of the misconduct by VW,” says Richard Mallett, a lawyer at James H. Brown & Associates.

As many as 11 million VW, Audi and Porsche owners in Canada, the United States and Europe may be entitled to compensation.

In September 2015, it was discovered that VW had installed software in VW diesel 2.0 engines that would essentially trick emission testing equipment into thinking the cars complied with EPA regulations. In fact, the vehicles were emitting up to 40 times the legal limit of nitrogen oxides (NOx).


“This is not what anyone expected from VW,” says Mallet.
“People thought this was a reliable vehicle, fuel-efficient vehicle, and they were driving ‘green cars.’ They have got anything but.”

VW has admitted wrongdoing and the company’s CEO has resigned.

VW is the second largest automaker in the world after Toyota and GM. In 2015, it produced a record 10 million vehicles. The company’s assets are in the many, many billions of dollars.

How much VW owes to owners of these compromised vehicles is something that has to be determined.

More AUTOMOTIVE RECALLS News
“It is going to be a combination of decrease in the value of your vehicle, cost to repair, change in fuel efficiency, the ‘hassle factor’ or how much time it takes to deal with the problem. I think all these things will go into the ultimate calculation of the loss and there are hundreds of thousands of vehicles involved, so this will take some time,” says Mallet.

“VW has already been making efforts to compensate dealerships,” says Mallet. “They obviously would not have known what VW was doing with respect to falsifying emissions, so I expect they do have a case at some point.”

If you or a loved one have suffered losses in this case, please click the link below and your complaint will be sent to an automotive accidents lawyer who may evaluate your AUTOMOTIVE RECALLS claim at no cost or obligation.
Request Legal Help Now

Posted by
Nikki
on December 31, 2015
Yes I Have had my paid off 2014Golf for a while now. I had noticed for a long time that t has eaten nothing but gas. I complained so much it's terrible.

Posted by
barbara sidwell
on October 4, 2015
What about vw superbeetle 2003 models