Last December June was admitted to the Augusta VA medical hospital (she was in the military for 10 years) with abdominal pain and a high fever: she had Chrone's disease and it was getting worse. But June checked herself out due to the poor hygiene conditions, so bad that she believes the hospital warrants a Veteran medical malpractice lawsuit. 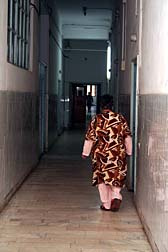 "My private physician first diagnosed me with Chrone's disease in 2004, but the treatment and tests got so expensive and I was getting so sick I had to take time off work," says June. She could no longer afford private care so she had no choice; in May, her boyfriend drove June--several hours away--to the Gastrointestinal Clinic at the VA hospital where she was admitted.

She had problems right from the start. "First off, they left me in the hallway for hours and when I was finally admitted, the room was filthy," June says. "There wasn't even a clean towel—I had to use paper towels. I have an immune deficiency and the last thing I need is to get a bacterial infection.

"It took forever to see a doctor and I didn't get any medication until 9.30 that night. My boyfriend visited the next day and he had to empty the trash can, he was about as mad as me. It was not until the second day that I was given washcloths and towels. My bedding was never changed. A different nurse came by with different meds and asked what was wrong with me!

It was an experience. After three days I wasn't getting any better. In fact I felt worse, possibly because I was so stressed and worried about getting an infection. I called my boyfriend to come and get me and discharged myself.

I am 44 years old and need constant treatment; my medication has almost run out and I don't know why I have to drive all the way back there—why can't they just renew it over the phone? They have in the past.

Now I am trying to schedule an appointment with another doctor, any doctor: I am down to 90 lbs and I don't have a physician. But at the VA hospital, you're not supposed to complain. Instead of treatment I get attitude. After I discharged myself they sent me a survey and I responded negatively of course. This is likely the reason that my appointment with the specialist was cancelled and when I try to reschedule all I get is a negative response, a brush-off."

More VETERAN MEDICAL MALPRACTICE News
June wasn't injured due to negligence of a doctor or other medical personnel at a VA hospital, but she wants to tell her story as a call to 'clean up' VA hospitals and possibly help others who may not have walked out of a VA hospital on their own two feet. Not only are infections burdening hospitals, they are also killing patients.

According to a study from 2006, hospital-acquired infections are estimated to affect about 2 million patients annually and cause an estimated 100,000 deaths: that's one out of every 20 patients who are admitted to hospital. Nationwide, hospital infections are the eighth-leading cause of death.

That statistic in VA hospitals could very well be higher. June is fortunate she got out unscathed, given the unsanitary conditions.