Well-known attorney Shanin Specter has been flying “legal sorties” into the Department of Veterans Affairs (VA) for a long time. 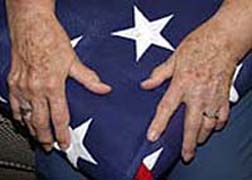 Although, Specter says, VA care has improved substantially “from the bad old days,” the current problems are definitely reminiscent of the VA of previous decades.

The Department of Veterans Affairs and Veteran medical malpractice suits continue to surface, and Specter currently represents a number of former servicemen and women and their families engaged in combat with Veterans Affairs over improper medical care.

A new report, “Friendly Fire: Death, Delay & Dismay at the VA,” from the office of Senator Tom Coburn (R-OK), says hundreds of deaths can be tracked to the department’s incompetence and delays. In the past, the VA has taken responsibility for 23 deaths, but Senator Coburn’s report says,
“That over the past decade, more than 1,000 veterans have died as a result of VA malfeasance.”

“It is not possible to put a precise number on how many people have been harmed by delays in medical care at the veterans administration,” says Specter. “But it is axiomatic that medical care, when delayed, will cause harm in a lot of circumstances.”

Senator Coburn’s report details a number of cases. Most notably, a Navy veteran who was forced to wait months for care and had to be rushed to the hospital only to be sent home despite a note on his chart indicating his condition was urgent. He died of bladder cancer one week after finally getting an appointment at the VA hospital.

“For example, when there is a suspected cancer diagnosis, if there is not a prompt test and a determination and prompt treatment, then that will worsen the prognosis,” says Specter. “You can’t make people wait to see a doctor for three months when they have an urgent medical issue.

“I think that the care provided at the VA hospitals, when it is provided in a timely fashion, has improved a lot over the decade,” says Specter. “It used to be that the VA was the stepchild of the American medical system, and for the most part, that is no longer true.

“However, the delays in getting care are an entirely different situation,” Specter adds. “And it is a reminder of days gone by where care at the VA was substandard. Now the issue is not so much substandard care, the issue is can you get the care; and I have to say this has to be addressed.

“When you have delays, you are going to have more deaths and other complications that are going to affect quality of life,” says Specter.

Coburn’s report also includes one of Specter’s cases. He obtained a highly publicized $17.5 million result for an ex-marine, Christopher Ellison, who, in 2007, suffered a stroke while driving home after a VA dentist continued with a multiple tooth extraction despite the fact that Ellison's blood pressure was crashing.

More VETERANS MALPRACTICE News
The VA has continually claimed that it is short of funds. However, Senator Coburn’s report says that VA funding has actually increased, and when adjusted for inflation, VA funding has increased by over 92 percent in the last 10 years.

Some of that money been paid out in legal settlements. According to the Coburn report, lawsuits have cost the VA close to a $1 billion.


Shanin Specter has obtained more than 200 verdicts and settlements in excess of $1 million. Many of Specter’s cases involve issues of social justice, and corporate and government responsibility. He is known for his attention to detail, his tenacity and fearless pursuit of justice. Among his many achievements, Specter won a $105 million wrongful death personal injury case - the largest personal injury verdict ever in Pennsylvania - on behalf of a woman who was killed by a fallen power line. He is a partner with Kline & Specter in Philadelphia.

If you or a loved one have suffered losses in this case, please click the link below and your complaint will be sent to a malpractice lawyer who may evaluate your Veterans Malpractice claim at no cost or obligation.
Request Legal Help Now

Posted by
Jerome R. Newland
on July 24, 2014
Had to wait 9 months for a provider, with no providr no fee-basis, no fee basis no treatment in Nephro, Endo, Cardio, GI, Neuro and Psych. Where VA Med Cen Manila, Philippines.

I believe this qualifies under the Torts Claims Act, regardless of exclusion (k). The Philippine Property Act of 1946 gave to the US President all right title and interest in property being used by the United states or any agency, including the VA.

I had filed a malpractice claim in December 2012, the bad treatment started immediately after. I filed for 15,000,000. malpractice claim for multiple causes of medical malpractice. I would appreciate at least a conversation by internet if possible so time zones don't count.

I am 100% disabled with service connection for Diabetes Mellitus, Neuropathy, Radiculopathy, Chronic Kidney Disease, Cardiovascular Disease, and other related issues. I am still being harassed by the clinic manager. I have filed my claim to VA Counsel in Washington DC. Denied. Currently there under reconsideration. That's where I am, and don't want to stall there.

Click to learn more about LawyersandSettlements.com
LawyersandSettlements.com - A trusted, independent legal news provider bringing quality news and information on legal cases and lawsuits filed in the United States of America to its readers since 2002. Over 650,000 legal help requests including Malpractice Cases, Drugs & Medical Cases, and Personal Injury Cases have been forwarded to lawyers all across to the country.