Wills, Trusts, and Estates: "We thought we had all the bases covered"

When you're planning and establishing a trust for your estate, look for a trustee who knows the difference between your interests and their own and who will work for you. Large financial institutions such as the Bank of America certainly know that difference, but as Lorene Grant discovered, they also know how to make your trust and estate work for them.

Grant (not her real name pending possible legal action) worked with her father on the disposition of his $1.5 million estate before he died in 2005. Of the trust that was eventually established through a Bank of America financial advisor, she says, "This is a trust that Bank of America recommended the attorney make out for my dad, who was legally blind, and they made it to their favour, not to ours." 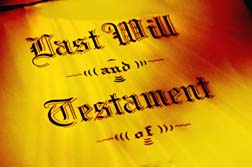 Under Bank of America's management, Grant receives an annual fixed 3.1 percent of total assets in her account. While she is glad to have this income, she's convinced that Bank of America is not acting in her actual best interests. "At my age of 65 and almost 66," she says, "if they were looking at my financial situation, they would be working on making me debt-free, because the trust is not part of my estate. At death, my portion goes to my brother, or is split between our six kids."

"I would gladly take less interest income if I was debt-free, but I would certainly not need it. Now everything I receive goes to pay bills, the mortgage, student loans—it isn't working for me.

In addition, Grant says, Bank of America invests her own and her brother's trust assets exclusively through Columbia Management Group, their in-house investment management division. Grant says, "They have nothing to lose—they get maintenance payments from Columbia's funds and the maintenance from us as the trust as well. So they're double-dipping. Their people pay them and we pay them; they're actually getting more out of it than we are. And there isn't anything I can do to gain control of it. We don't know how to change trustees; there's no stipulation for that in the trust, so we can't do it—it's at their discretion."

"To institutions of this size, we're just little guys. But one and a half million dollars is a lot of money—maybe not to them, but to us. My dad and I spent many hours working through this trust together, and we thought we had all the bases covered, but when he passed away, we didn't have one base covered.

"I just didn't think a bank would do this kind of thing," Grant concludes. "I thought they might have had a heart, but, well..." and she chuckles.

If you feel you are owed money, please contact a lawyer involved in a possible [Trusts and Estates Lawsuit] to review your case at no cost or obligation.
Request Legal Help Now

Click to learn more about LawyersandSettlements.com
LawyersandSettlements.com - A trusted, independent legal news provider bringing quality news and information on legal cases and lawsuits filed in the United States of America to its readers since 2002. Over 650,000 legal help requests including Wills/Trusts/Estates Cases have been forwarded to lawyers all across to the country.