Taxotere lawsuits alleging women suffered permanent hair loss as a result of using Taxotere have been filed. Their allegations of Taxotere side effects are seemingly supported by scientific studies that suggest a link between the use of Taxotere (known generically as docetaxel) and the development of alopecia. 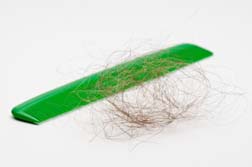 Hair loss (alopecia) is a usual side effect of chemotherapy, but most patients expect that once the chemotherapy is stopped, their hair will grow back. Experts have noted that in recent years more patients are suffering from permanent, irreversible hair loss.

As a chemotherapy drug, Taxotere is used to treat certain cancers, including breast cancer, prostate cancer and advanced stomach cancer. It is designed to work by preventing the growth of cancer cells within the patient’s body. But some patients claim it caused them to permanently lose their hair.

They may be on to something. A study published in the Annals of Oncology (2/14/12) suggests docetaxel is associated with an increased risk of permanent alopecia. The study involved 20 female patients who were treated for breast cancer, treated with docetaxel, and developed permanent alopecia. Researchers ruled out mineral deficiencies and thyroid disorders as a cause of the alopecia, and noted that all but one of the patients had no history of alopecia.

Following a treatment regimen of fluorouacil/epirubicin/cyclophosphamide (FEC) followed by docetaxel, all patients developed similar signs of alopecia, including loss of hair within two weeks and incomplete hair regrowth within four to six months. Data collected led researchers to conclude that “severe and permanent” female hair loss is a side effect of the FEC-docetaxel regimen.

As the study’s authors note, chemotherapy-induced alopecia is a distressing side effect of chemotherapy, with one study participant stating she would rather have not received any chemotherapy than having developed permanent hair loss.

Because the study has a small sample size and did not have a control group, more research must be done into a potential link between Taxotere and permanent hair loss. The study did not show that Taxotere causes the hair loss, although researchers wrote that a systematic prospective screening of all breast cancer patients in their institution did not find any breast cancer patients who were treated using anthracycline-based regimens and developed severe, permanent scalp alopecia.

More TAXOTERE HAIR LOSS News
Meanwhile, in a presentation to the National Cancer Conference (2014), researchers reported their findings from a survey of patients who received docetaxel. Of 189 questionnaires sent out, 134 were returned. Twenty-one respondents noted persistent scalp hair loss.

“Long term significant scalp alopecia (here lasting for up to 3.5 years following completion of chemotherapy) may affect 10-15% of patients following docetaxel for EBC [early breast cancer],” researchers wrote. “This appears to be unrelated to other patient and treatment characteristics. ”

Lawsuits have been filed against Sanofi-Aventis, maker of Taxotere, alleging patients were not adequately warned about the risk of permanent hair loss. One such lawsuit was filed by Ami Dodson in the US District Court for the Northern District of California. That lawsuit is case number 3:16-cv-01251.

Posted by
Tina Courtesis
on July 6, 2016
Breast cancer in 2008, barley any eyebrows almore, can I get in the law suit too. My hair came back, thank God.
Posted by
Ange-mary
on July 1, 2016
Is the law suit only in America? I live in the uk & like others was not told this could happen with FEC-T. My oncologist said we don't tell about rare risks! I have to wear a wig. I am totally crushed by this -much harder then loosing a breast.
Posted by
Dicol B.
on May 2, 2016
Taxotere is not the only drug that is causing extreme and permanent hair loss. The HBP drugs I take have the same effect. First my hair started thinning. Now there are bald spots on top including my hairline & eyebrows. Also thinning of body hairs. Therefore, their appears to actually be a drug-induced chemical interaction that either upsets balance of or literally stops hair growth in the meds for both Cancer & HBP.

(I suggest lab testing to disprove this theory.)

Posted by
France's Elaine Henderson
on April 23, 2016
Took Taxatere in 2012, lost all my hair , all body hair, it's "4" years later and I have a third of the hair I had before chemo, I HAVE to wear. Wig, no eyebrows, a few hairs, have to draw them in...wigs are really hot in the summer, and most of the time anyway, makes me sweat my eyebrows off, really frustrating..I lost one breast, I was stage 3, like most women with this side affect, I was NOT given a choice, or told of the possibility of permanent hair loss...IM A HAIRDRESSER FOR GOODNESS SAKE!!!! Would NOT have taken this drug , had I known...can you help me?