Michael S. Guttenberg, a former employee for UBS AG along with David Tavdy have pleaded guilty to a plot surrounding stock trading utilizing insider information. The information was in regards to upgrades and downgrades of stock of analysts working for UBS. Both Guttenburg and Tavdy plead guilty to the charges alone in separate incidences by no one else's prompting. The guilty pleas from Guttenburg and Tavdy arrived a few short days before they were to appear on trial.

42 year old Guttenburg said that he realized the inside information was not supposed to be released. He said he regrets what he did. He is facing indictments on six counts which can have a sentence of roughly 6 ½ years to 8 years in prison beneath the auspices of federal sentences. He will receive his sentence on June 2, 2008. 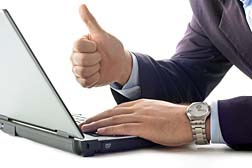 39 year old Tavdy is facing charges for three counts of which he has pled guilty for. He is facing the possibility of sentencing in the length of 5 ¼ years to 6 ½ years under the auspices of federal sentence standards. Tavdy has said he knew this was and infringement of the law. He will receive his sentence on June 30, 2008. His former employment status was that of a proprietary trader for broker dealers Andover Brokerage LLC and Assent LLC. He was affiliated with the day-trading partnership of Jasper Capital LLC.

The charges sprang up in 2007 for two different stock scam incidences. There are allegedly 13 other people that have been involved with stock schemes of this nature. The information received was for illegal stock trades that would have been in advance of public knowledge of recommended stocks. The activity was a forerunner to future mergers and acquiring of new companies by Morgan Stanley. The recent guilty pleas of Guttenburg and Tavdy have raised the number of guilty pleas in total to 12. All 12 people have pleaded guilty to charges brought against them of criminal wrongdoing involving inside stock information that should not have been made public knowledge.

More News
The prosecution has alleged that Guttenburg had imparted his knowledge of the private plan for upcoming upgrades and downgrades by analysts with UBS. The information was shared with Tavdy and Erik Franklin. Franklin was once an analyst for Chelsey Capital and in charge of Q Capital Partners LP during the years of 2001 to 2006. Franklin entered a guilty plea during 2007 for the incident.