People like Carl S. (not his real name) are not seasoned investors, so they rely on the stock market financial advice given to them by their advisors. They believe the information they are given is completely accurate and their money has been invested safely. They cannot afford massive stock market losses, yet that is exactly what many of them are currently experiencing.

"In 2005, my wife and I retired," Carl says. "We went to a Merrill Lynch financial advisor and had about $200,000 to put away for our retirement. We told them at the time that this was all the money we had for retirement and we wanted it to be secure. We didn't want risk. 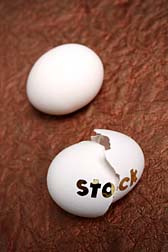 "They bought preferred stock with the money. Some of it was in Merrill Lynch, Countrywide, Lehman Brothers, JP Morgan and ING. We were doing pretty well for about a year, there. The preferred stock had between a 6 percent and 7 percent interest rate.

"We bought a motor home and used the securities on stock with Merrill Lynch for collateral—it was about $115,000. Then, we took a trip out west. While we were out west, the market started dropping.

"By the time we got home, this past December, the stock dropped $25,000 to about $175,000. We went to talk to the financial advisor and he said that all the companies, Merrill Lynch, Lehman Brothers and others, were still rated high, so as long as they didn't go bankrupt, I'd be okay. He said they would continue to pay interest on preferred stocks, so we hung in there.

"That was a mistake, because they kept going further and further down. The advisor kept saying that they should come back up.

"They did come back some, but then Lehman Brothers filed for bankruptcy and the bottom fell out. We lost the worth of the loan, so I lost about $100,000. I lost 50 percent of our retirement savings. We're on a pension and there is no way in the world I'll ever recoup that in my lifetime.

"It put a lot of stress on us. We lost all that money. I'm sure there are a lot of people out there that are just as stressed as I am. We were pretty comfortable. We could do what we wanted to do. We're not millionaires or rich, but we were comfortable. Now, the RV is for sale. We don't have the money to do what we were doing. Our lifestyle has changed—it takes all we can do to pay our bills.

More STOCK MARKET LOSSES News
"I'm getting over it, but it was hard on my wife. This is really, really bad and I don't think it had to happen. I'm 67 and I wasn't in the Great Depression but my parents were. They were told that the Depression could never happen again. The government was supposed to be watching things, but there was nobody watching these companies.

"I think the ratings were messed up, too. Lehman Brothers filed for bankruptcy on a weekend and they were still rated A at that time. Someone must have been putting out false information, but that's the information you rely on. Your advisor says, 'They're still rated high, so stay with it,' and you listen.

"A lot people lost their 401(k). We worked all this time, saved and got in pretty good shape and all of a sudden we're all in bad shape. It's a critical time in our country and it didn't have to happen."