UBS AG faces a lawsuit filed by investors who allege their stock market losses are linked to the company's alleged scheme to help clients hide assets from authorities. The plaintiffs allege that their stock losses were caused by UBS AG's illegal activities—activities that the investors were never told about. They are now trying to recover some of their losses while they wonder how a company that marketed itself as ethical could have been involved in illegal activity. 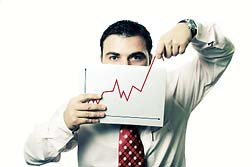 According to a Bloomberg report, the lawsuit alleges that UBS claimed that it was a very honest company even though it was "actively engaged in a tax evasion scheme." That scheme was eventually discovered by US authorities, resulting in the company's stock prices dropping dramatically. Up to $17.9 billion in client assets were allegedly hidden in offshore accounts by UBS.

"When the scheme was finally uncovered by US authorities, and UBS began disclosing the true nature of its Swiss banking business, the company's stock price plummeted, causing substantial losses to UBS shareholders," the lawsuit states. Furthermore, "Defendants touted the record levels of Net New Money attracted, bragged of record income, profits and earnings per share ("EPS"), and boasted of the Company's purported commitment to integrity and business ethics… These statements were all false and misleading because at the time they were made Defendants were actively engaged in a tax evasion scheme which…Defendants ultimately could not abandon because it was simply too valuable to UBS."

The former head of UBS' international wealth management division, Raoul Weil, has been indicted, charged with conspiring to help wealthy Americans hide their assets from the IRS. He, along with 7 other current or former UBS officers and directors are named in the lawsuit. The lawsuit was filed by New Orleans Employees' Retirement System on behalf of UBS investors between May 4, 2004 and January 26, 2009. It seeks recovery of billions of dollars among all members of the class.

In addition to the lawsuit and indictment, UBS faces an SEC investigation into whether or not the company failed to register as a broker-dealer or investment advisor.

Meanwhile, UBS also faces a lawsuit by European investors who lost money in funds that were run by Bernard Madoff. The investors allege that UBS, and Bank Medici, deposited their money in funds that were run by Madoff, and failed to properly protect that money. Under European laws, if UBS violated rules on how investment funds should be run the company could be liable for some of the losses.

More STOCK MARKET LOSSES News
Investors know that no investment is without its risks. Even the safest of investments carry some degree of risk, even if that risk is minimal. However, the risk to investor money is much higher when a company or broker is involved in illegal activity. When such illegal activity is uncovered, it generally results in drastically lower stock prices, and investors who had no idea about the illegal activity are the ones stuck paying for the drop in value.

Financial companies have a duty to act in their investor's best interests and most investors would agree that engaging in illegal activity does not constitute acting in their best interests. Most would never knowingly put their money with a company that would commit illegal acts. Unfortunately, those who invested with UBS may now be learning, too late, that the company was acting in its own best interests, and may have been violating US law in the process.