Frank H. (not his real name) has lost a lot of money this year in the stock market. His variable annuity and his IRA have both lost money and he is concerned about paying his wife's nursing home bill. Frank thought he would have money to leave his children, but thanks to recent stock market losses, he may have very little left to give them. 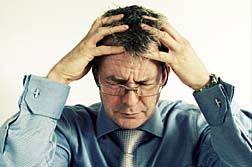 "I lost a lot of money," Frank says. "At one time, I had about $126,000 in a variable annuity. That is down to about $80,000 now. That drop happened in the last year. That's sizeable. I put the money in that variable annuity during September of 2005. I have some other annuities and those are guaranteed but this was not. It was quite a large amount and it just fell out of its tree.

"I have another IRA and that has dropped quite a bit, too. It's lost $10,000 or so. That's all my hard work for the years down the drain. This has raised heck for us."

Frank needs that money because his wife has just been moved to a nursing home due to an Alzheimer's diagnosis. She requires care, but that costs Frank $7,000 a month. Frank is retired and, at 83 years old, very concerned about his future and his finances.

"I can't think anything positive about what has happened. I think I have to take out what's left [of my money] or I'll lose it all. The annuities were recommended and I was interested in them at the time. The broker was a friend of mine, so I took out more than I thought I would for that annuity.

"I didn't want long term stuff. I know you're supposed to stay in there [the market] and I'm getting pretty old. I don't have much time left and I wanted something guaranteed and safe. I just wanted my money to be safe.

More STOCK MARKET LOSSES News
"So, I'm going to go the safe route, now. I'm going to pull my money. Initially, I put in $105,000 in the variable annuity, but it went up to $126,000 in about a year. But, it started going down this past year. I talked to the broker about taking the money out, but he keeps thinking we should hang in there. I know I'll take a penalty on what is left to take out, but that's still better than losing it all.

"Everything has changed so much; it's a scary time. I'm retired and I'm 83 years old. Now that we have a $7,000 a month nursing home bill, that will eat up my money fast. The outlook is not good."

Many people have lost more money than they could afford to in the recent stock market losses. They thought that money would be available for their retirement, only to learn that the money was not as safe as they believed it was. Like Frank, many are trying to determine their best course of action to protect the little money they have left, so that they don't lose everything.