Todd says that more than ten years ago he was diagnosed with Stevens Johnson Syndrome (SJS) that he believes was a severe reaction to Advil cold medicine. Needless to say, he hasn't taken a cold remedy since. "Even though it happened so long ago, I remember it vividly," says Todd. "It was so excruciating--I never want to go through that again." 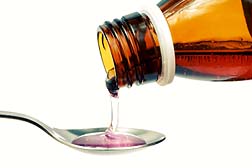 " I had an allergic reaction that started out as flu symptoms and then I ran a high fever," says Todd. " My skin seemed to melt in spots all over my body including my legs, arms, stomach, testicles, tongue and cheek and even inside my mouth. My throat was so sore I couldn't swallow my own saliva so I was constantly spitting.

The next day the fever got so high and the whites of my eyes turned blood red; I called my father and he took me to hospital. They saw us coming in and grabbed a wheelchair. I knew I was sick but didn't know how seriously—neither did the doctors. They put me on IV and just sent me home; they told me I was dehydrated and gave me an antibiotic and something for my rash.

I went another day at home but couldn't take anymore—I looked like I was covered in chickenpox. This time I was admitted. A specialist scraped my eyeballs and asked what kind of med I was on. I had taken Advil, an over-the-counter med for the 'flu but they didn't think that was the cause. However, I had a sneaking suspicion that I'd had an allergic reaction to the Advil.

More STEVENS JOHNSON SYNDROME (SJS) News
I was in the hospital for about a week. During that time, specialists came in and examined these 'target areas' on my skin and in my mouth. Still, they couldn't give me a diagnosis other than an allergic reaction. I'm a black man—you can easily see the whites of my eyes. But there wasn't any white in my eyes. It was scary.

I remember them giving me some kind of steroid and eventually my skin began to clear up. 'We believe you have SJS – a disease caused by an allergic reaction,' was all they said. The hospital bill was outrageous and I paid as much as I could. It finally went to collection and my credit is still bad, to this day. I think I owed around $40,000.

It was very frightening and for a minute I didn't know if I was going to live or die. Friends and family visited and their expression was like they were looking at a dead man. I feel that coming out of this was a blessing. I guess it wasn't my time but I got pretty close with Stevens Johnson Syndrome. "