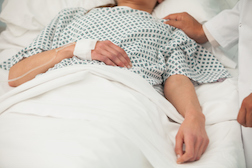 In the case of Sandy Simonson, a chemical buyer for a hair manufacturing enterprise who hails from Houston, it was her antidepressant that was suspected of sending her to the hospital with Stevens Johnson Syndrome rash, and other SJS symptoms.

Simonson told MailOne (03/09/17) that she began taking antidepressant medication following a diagnosis of bipolar disorder in October of last year. She initially felt fine on the medication, so her doctor increased what had initially been a fairly low dose.

“But after about three weeks, I started noticing I was getting a cold and a fever,” Simonson said in an interview. “I started to notice my arms and legs were swelling and I itched all over terribly.

“My skin was raised and everything felt swollen – my face, my arms, my fingers.”

Simonson sought medical attention, but was initially sent home. Two days later, Simonson was back to the hospital with Stevens Johnson Syndrome symptoms that were progressively worsening. “My esophagus was so swollen it started closing up and my skin felt like it was on fire,” Simonson said.

She wound up in intensive care with a diagnosis, by the beginning of December, of Stevens Johnson Syndrome. Doctors informed Simonson and her husband that they suspected her bipolar medication.

More STEVENS JOHNSON SYNDROME (SJS) News
Usually triggered as an adverse reaction to pain medication or other pharmaceutical drugs, SJS begins as a Stevens Johnson Syndrome rash, but then escalates to a condition resembling second, and third-degree burns in short order. At its worst, SJS and TENS can result in inflammation and serious irritation inside the mouth and mucous membranes, as well as lesions and loss of the upper dermis akin to serious burns. Patients are often treated in the burn units of hospitals, and the affliction has been likened to having one’s body burn from the inside out. Some patients have experienced the sloughing away of large sheets of skin. Those who survive are often left with severe scarring and vision problems, including moderate-to-severe light sensitivity after sometimes months in the hospital.

Simonson was one of the lucky ones. The Texas woman was moved from intensive care after four days, spending an additional four days in the hospital before her discharge. While the swelling had reduced significantly, “when I got home the [Stevens Johnson Syndrome rash] was still pretty bad,” she said.

“If I had known my medication would have given me this rash, I would never have taken it.” The medication name was not revealed.