Stevens Johnson Syndrome Victim Has Permanent Scarring in her Mouth

Donna Rushing is a resident from Tampa who developed Stevens Johnson Syndrome from a medication she had been taking. While she was spared hospitalization and more serious SJS side effects that can often include massive loss of skin and life-threatening infections, her battle with Stevens Johnson skin disease was enough to cause her to lose weight, affected her eating and has left her with permanent scarring in her mouth. 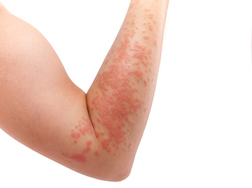 According to Robert Herriman, a microbiologist and editor of Outbreak News.com and the host and producer of the Outbreak News This Week Radio Show – a podcast based in Tampa – Stevens Johnson Syndrome affects about one, or two people per million. It is, indeed rare – but when it raises its ugly head, the results can be devastating. Some have died. Others have been left with horrible scarring, vision problems, and emotional trauma that can last for years.

It begins with a Stevens Johnson Syndrome rash, which was the first indication in Donna’s case.

“I had, like a flat, red rash on my face and my upper body,” she told the Outbreak News This Week Radio Show (03/17/17), adding that she was running a fever of 102 that lasted about a week. Donna also tells the interviewer that one of her fingers on her left hand presented with a raised rash, “and it just itched and itched.”

That’s how it started – and it wasn’t long until her Stevens Johnson Syndrome symptoms got worse – about a week and a half. Her finger worsened, with an SJS rash that appeared to escalate into what appeared to be a serious burn. “And my mouth was real bad – it was, like, raw inside. It was bleeding, there had been blisters and my tongue was real swollen and white. Then I had a rash on my face and on my arm that was almost like chicken pox.”

Donna had been taking antibiotics at the time to combat an infection in her leg. When she first went into the doctor with her finger and the fever a primary concern, her doctor’s first thought was it was due to the medications she was taking. The medication was not identified, but Donna said the doctor advocated she stop taking it.

“But then I had to go back two days later,” as the inside of her mouth was blistering up and getting worse. That’s when the diagnosis of SJS was made – and the medication Donna had been taking was deemed to be the trigger.

More STEVENS JOHNSON SYNDROME (SJS) News
Swallowing was an issue as her throat was also raw.

Although Donna was not hospitalized, recovery has taken a year and she isn’t out of the woods yet. For one thing, her sense of taste has been affected. She also lost 60 pounds as result of Stevens Johnson Syndrome. “It was so bad in my mouth; I could hardly eat or drink. Even drinking water was hard….”

“I can feel with my tongue that I do have scars in my mouth.”