Sherri's daughter Amanda was prescribed the antibiotic Bactrim DS to clear up an infection that appeared a month after she had had a piercing. One family doctor and two different emergency ward visits later, Amanda luckily escaped a close call from misdiagnosed symptoms of Stevens-Johnson syndrome, an allergic reaction to drugs.

When the pierced area of her daughter's collarbone suddenly started to redden, Sherri consulted with their family doctor, who then decided to treat the infection with Bactrim DS.

"Towards the end of the prescription, about 4 or 5 days into the treatment, Amanda woke up one night with a terrible headache. On top of that, she had real trouble breathing." 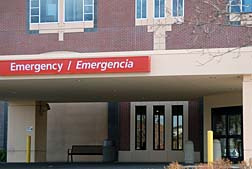 "We rushed her to Emergency; I remember it was a Friday. There they prescribed the antihistamine Benadryl for the rash but it continued to get worse. I definitely asked them if it could be caused by the Bactrim DS and they said no, the allergic reaction would have shown up right away. The only thing that would have made them admit her was if her breathing had been worse."

"The very next day we had to rush her to Emergency at a different hospital and we were told to stop the Bactrim DS immediately. This time they put her on a UV drip of steroids to counteract the allergic drug reaction. What started out as dots had filled in until she had a rash all over and it just got worse and worse. It took days for it to go away and in the meantime she had a horrific headache. I took pictures on my cell phone - it was like she was sunburned. It was horrible."

"Before sending her home they did a blood test for damage to the organs. Amanda hates needles so that made her just hysterical. We were lucky it wasn't at a too advanced, life-threatening stage but it did take 2 weeks for the redness to fade. It was very very scary."

More News
Sherri did some research on reactions to drugs, which helped her formulate the right questions to ask the doctors.

"On the internet I read about some cases where people had been seriously damaged by SJS. I called my doctor back to have her note in Amanda's chart never to give her this drug and she told me, at that point, that in her experience other people had had reactions only at the end of their treatment."

"Luckily Amanda didn't suffer any physical damage because of the SJS but because she almost died, we insisted she take the piercings out. I have co-payments I would like to get reimbursed for - the ER bills and especially for the pain and suffering we both went through. People need to be aware that SJS doesn't react right away; it builds up. This was very frightening."