Mother with SJS put into a Coma

On November 27, 2008 Kim Oake was put into an induced coma in the ICU unit because the pain of Stevens Johnson Syndrome (SJS) and toxic epidermal necrolysis, also known as TEN, is too excruciating to bear. Kim had an allergic reaction to a run-of-the-mill antibiotic. Adverse reactions to a drug, either prescribed or over-the-counter, is the main cause of SJS. And the most common drugs have been linked to this horrific disease, including ibuprofen (Advil and Children's Motrin), Ketek, Dilantin, anti-convulsants and antibiotics such as penicillin. 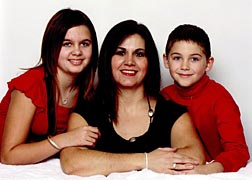 While Kim, a single mother of two, languishes in the ICU on a ventilator with her body wrapped in antibiotic gauze to prevent infection, her family, including her sister, Lisa Oake, stand watch 24/7.

"Kim works as an animal control officer and she got a bite from a feral cat," says Lisa. "She was given a tetanus shot and an antibiotic but rather than get better, a few days later she started to get very sick. Kim was nauseated and developed a rash that got progressively worse. After a few days she went to the hospital—at first the doctors didn't know what it was and sent her home but the next day she returned because really bad lesions were all over her skin"

This time Kim was admitted and diagnosed with SJS/TEN.

Lisa says Kim's skin started to slough off; it got so bad that she lost all the skin from the top of her head down to her knees. Kim was put into an induced coma because the pain would have been unbearable. "So far there are no signs of infection (thank God) and right now they are trying to get her to breathe on her own because the ventilator itself--having the tube going from her mouth and down her throat--poses an infection risk," says Lisa. "They are going to try to take her out of the coma within the next 3-4 days; the doctors explained that they have to do it gradually because it is like walking a fine line between managing her pain and getting her off the ventilator.

"As you can imagine, this has been a nightmare and everyone is devastated. Kim is the youngest child in our family; she is so beautiful and vibrant and has dedicated her entire life to looking after animals. And she is one of the best Mums you could ever meet-- Shauna is 12 and Hunter is 8. Thankfully, her children don't know the full extent of this illness: the social worker told us to explain SJS to them in simple terms.

They were told that 'Mummy has a rash and it is very itchy so the doctors put her to sleep so she wouldn't be uncomfortable with it--now we are just waiting for her skin to heal and then she can wake up.'"

A lot of people have never heard about SJS, especially the SJS Motrin and SJS Ketek link, to name a few common drugs associated with this illness. Lisa and her family already knew about SJS because their friend's daughter had it--she survived. As well, Lisa says her friend suffered from SJS when she was 20 years old! These families come from a small community in Newfoundland which begs the question: is SJS as rare as the drug companies would have us believe? Would every doctor recognize the early symptoms?

More SJS News
"We got lucky because Kim's doctor treated that 12-year-old girl two years ago," says Lisa, " so he identified SJS immediately. And we are lucky because they got the proper drugs into her right away and she lived near the hospital.

I have been talking constantly to the nurses and the doctors and my family in Newfoundland. I have to say that the healthcare Kim received has been phenomenal—she is getting the best care and those nurses in ICU at the Health Sciences Center in St. John's, Newfoundland have been amazing. But Kim is still seriously ill."

Lisa says that when Kim gets better, she doesn't think her sister will want to settle a lawsuit out of court. Rather, Kim may want to have her day in court and be a spokesperson for SJS. "When she gets out of hospital, I know that Kim will want to educate people, especially parents with kids, about SJS and its link to certain drugs."