Allopurinol a Leading Cause of SJS

Neither Salima nor her prescribing doctor had any idea that Allopurinol, a treatment for gout, is one of the leading causes of Stevens Johnson Syndrome (SJS). "None of the doctors at the hospital could make a diagnosis until a dermatologist was consulted," Salima says. "Soon as he saw me and knew I had taken this drug, he knew I had SJS and that it was going to get a lot worse before I got better." 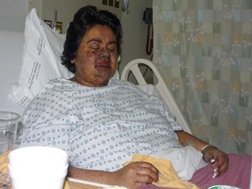 Allopurinol is a drug used primarily to treat hyperuricemia (excess uric acid in blood plasma) and its complications, including chronic gout. But Selima's problem with gout was miniscule compared with the suffering she endured from the life-threatening side effect of the remedy.


"[Now] I'm afraid of taking any med… I had a pounding headache last week and had Advil on my dresser. I said to myself, 'Suck it up, buttercup, you are not taking that.'"
"One week into taking Allopurinol I had muscle aches and fever but didn't think it had anything to do with the drug," says Salima. "I thought I was just coming down with the flu and it would pass.

"But two weeks later, my eyes were hurting—like pink eye—and I was feeling very ill. I went to the local clinic and while I was there I started to develop red spots all over my body that looked like measles. Coincidentally there has been a measles outbreak, so they assumed that I had measles and had to be quarantined. How could that be? I was sure I was immunized like everyone else in grade school.

"I had blood taken and would get the results in a few days. Meanwhile, I couldn't leave my house, and if my family members started to get any spots they would also be quarantined. 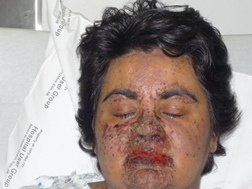 "On Sunday (the next day) I couldn't swallow and drinking water became difficult, but I gave it one more day. By Monday I was very dehydrated but couldn't drink a drop of water so I went back to the clinic and the red spots were now all over my body. The doctor had no idea what was wrong so I was admitted to hospital.

"For the first two days in hospital I was quarantined, on IV, and various doctors saw me. By now the rash was all over my face—it was like crusty scales. And I couldn't open my eyes. If I stood up it was like standing on glass so I had to be carried to the bathroom. All my mucous membranes were blocked and my mouth was bleeding; I couldn't figure out if the blood was coming from inside or outside. I had wet compresses on my mouth 24 hours a day to hold the blood. It was horrible.

"They finally called a dermatologist in. Soon as he saw me, I was diagnosed with SJS. He looked at my history and asked how long I was on Allopurinol; he said it was the number one cause of SJS! He was shocked that I had taken it for three weeks and I was told to take it forever because my uric acid is high. The dermatologist explained how this drug affects the mucous membranes. He also told me that l had to stay in the hospital for about eight more days.

"I had never even heard of SJS; it never occurred to me that I had a reaction to a medication. I was so mad at my doctor and pharmacist, how could they do this to me? I thought I was going to die. I wanted to hit someone; I wanted someone else to feel as bad as me at that moment.

"But I especially want the makers of this drug to go through SJS and suffer like I did. And I am still suffering. I went to the hospital on March 30 and I still have scars on my face, chest, back, arms, and my legs. The dermatologist said it typically takes a year to recover from SJS. 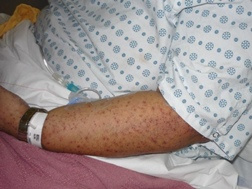 "Fortunately I have a great boss who allowed me to take a few months off work. I am a social worker and right now it would be difficult to do my job. My face looks burnt and I can't see too well: I would easily scare my clients, especially the kids. And I can't drive so I can't go anywhere.

"Every day I look at myself and can't believe this has happened. I'm only 39 and this has affected my life so much; I don't want anyone to see me. I don't recognize that person in the mirror.

"When I got better and visited the SJS website, the first thing I noticed were the photographs of victims, they looked just like me. And there it was: Allopurinol is one of the leading causes of SJS. Someone should have told me that.

More STEVENS JOHNSON SYNDROME (SJS) News
"I talked to my prescribing doctor last week. She was very shocked. She prescribes Allopurinol to all her patients and it is the first time one of her patients had SJS. I can't take any sulfa-based med ever again.

"I'm afraid of taking any med, not just sulfa. I had a pounding headache last week and had Advil on my dresser. I said to myself, 'Suck it up, buttercup, you are not taking that.' So I suffered through it. And I will do so for the rest of my life unless my life depends on a drug, because SJS is life-threatening."

Posted by
Bill
on January 27, 2018
Beware of this drug, after 8 long suffering years my father died because of it.
Posted by
ralph stevens
on December 29, 2016
i have been on this tell last week swollen ankles pain lots of side effects

Posted by
Ramon G Benavidez
on December 6, 2015
Have lynphomia cancer I heard this gout drug will cause lymph problems can this be resurched thanks will go into remission but I will always have it .