As far as anyone can tell, the recall of 188,000 pounds of e. coli-tainted ground beef by Minnesota-based Rochester Meats has prevented any further cases of illness beyond the six reported in Wisconsin and California. The voluntary recall began on January 12, 2008, and is the largest so far this year.

There's plenty wrong with this picture, however. For starters, the US Department of Agriculture (USDA) has not responded to repeated calls from lawyers and consumer advocates to name the restaurants and food services that received the contaminated meat. Apparently they're content to continue playing a "dangerous game" with consumer health cited by attorney William Marler.

Secondly, neither Rochester Meats nor USDA has revealed how much of the affected meat has actually been recovered. It could be a lot, or it could be be only a fraction, as happened in two previous Rochester Meat recalls. No one's saying. 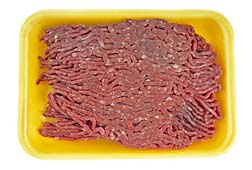 More to the point, no information has emerged about how and why the Rochester Meat ground beef became contaminated with e. coli, or why that contaminated meat was allowed to be sold and shipped to customers.

One thing we can be reasonably sure of is that the Rochester Meat recall won't be the last to occur this year. That's because, even though USDA has announced stricter measures to avoid a repeat of 2007's record ground beef recalls, there are still giant, and dangerous, loopholes in the new inspection protocols for beef trim used in ground beef and in regulations on ground beef sales.

First, the new USDA testing and inspection measures apply only to domestically produced beef trim—beef trim from foreign sources is not subject to any testing requirements at all. We know that domestic and foreign trim is customarily combined in the grinding process. What's hard to understand is why one trim is tested for e. coli and other contaminants and the other is not.

Because foreign beef trim is not subject to testing requirements, it's often cheaper, which may well mean that we'll see more of it in use as producers seek to reduce costs. And, as we now know, the contaminated beef trim that sickened dozens of people and triggered last year's 21.7-million-pound Topps beef recall came from Canada.

More News
Second—and this will come as a surprise—it's entirely legal to sell meat contaminated with e. coli. We learned recently from some anonymous meat inspectors that USDA allows beef on which e. coli has been found to be sold as a "cook-only" product for use in items such as precooked hamburgers, meat loaf, and taco meat. (Cooking ground beef to 160 degrees fahrenheit kills e. coli; let's hope that's happening with this stuff.) One inspector said that "cook only" contaminated meat is not reported to USDA, and that this contributes to higher-than-reported levels of e. coli contamination in many processing plants.

Almost three millions of pounds of precooked meat were purchased for school lunch programs in 2007; how much of this may have been contaminated with e. coli before cooking is unknown, since no labeling is required. Which makes sense, of course; would you eat meat that was labeled "Contaminated with e. coli before cooking—but don't worry, we promise that we cooked it to 160 degrees. Trust us"? Well, a lot of our children are doing exactly that, it seems—except no one's telling them so.

And so the dangerous game goes on. And it's being played with your own and your children's health.