That's because Westland/Hallmark was such a huge recall, centered around the abuse and slaughter of "downer" cows that may have been infected with bovine spongiform encephalitis (BSE, or Mad Cow Disease), which is relatively rare. Rochester Meat involved ground beef contaminated with E. coli O15:H7, which occurs naturally in the hindgut of cattle. Every cow carries E. coli, which is harmless to cattle but causes illness—sometimes severe and even fatal—in human consumers. 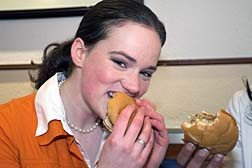 FSIS is charged with ensuring that contaminated meat does not reach the market; as part of its mandate, FSIS inspectors are supposed to inspect every cow on its way to slaughter. Diseased cows are not that hard to spot: they may show drooping ears or facial paralysis, or they may simply be unable to stand up. In theory, that should mean that BSE-infected cows are caught and culled before they're slaughtered.

In practice, though, as Westland/Hallmark revealed, the sheer numbers of cattle processed each day combined with FSIS's chronically understaffed inspection force, means that inspectors can only make cursory and irregular inspections. The processors themselves must be trusted to weed out the sick animals that FSIS misses. Sometimes they do and sometimes they don't; and nobody knows for certain how often they don't.

That, of course, has nothing much to do with E. coli. Every cow, healthy or sick, carries E. coli; FSIS is also expected to ensure that at all steps of processing adequate measures are taken to avoid contaminating meat with the bacterium. That includes inspecting processing plant practices such as avoiding contact between cattle hides and carcasses or washing out the insides of slaughtered cattle with hot water, as well as generally enforcing USDA's safety and sanitation regulations.

How well FSIS does this is unclear. The Rochester Meat recall, along with last year's major recalls from Topps Meat, Cargill, and other companies, indicates that the answer is "not well enough". Current and former FSIS inspectors have recently confirmed that staff shortages ranging from 10 to 22 percent in different regions mean, as one said, that "they're not covering all their bases." This was coupled with regulatory changes that transferred more inspection responsibilities to the processors themselves.

Basically, we don't know how much of the meat we buy is contaminated with E. coli, because cooking most cuts of beef such as steaks and roasts eliminates any E. coli present on the surface. The big exception is ground beef, because unlike other cuts, any E. coli present on the surface of the meat is mixed in throughout during the grinding process. The sudden spike in E. coli meat recalls during 2007 may be the best indicator, and it's not a good one.

More News
Fortunately, incidents such as Rochester, Topps, and Westland/Hallmark have focused attention on USDA's food safety troubles. Congresswoman Rosa DeLauro (D-Conn) recently said that she wants to see USDA replaced by a single agency tasked with ensuring food safety. DeLauro told the media, "Food safety ought to be of a high enough priority in this nation that we have a single agency that deals with it and not an agency that is responsible for promoting a product, selling a product and then, as an afterthought, dealing with how our food supply is safe." Additionally, the Government Accountability Office (GAO) is looking into the safety of USDA's National School Lunch Program, which uses large amounts of ground beef.

There may even be hope for USDA itself; food safety attorney Bob Marler recently told LawyersAndSettlements that FSIS seems to be acting more aggressively toward violators of inspection regulations in the wake of the many recent recalls. But the agency needs far better funding, staffing, and protocols before it can truly redeem its past failures.

In the meantime, LawyersAndSettlements wants to know if you've gotten sick from food you've eaten. That can only help keep the heat on those responsible.