San Diego County health officials say they are trying to contact restaurants that purchased beef from Rochester Meat Company of Minnesota. Rochester Meat recently announced the recall of 188,000 pounds of beef that may be contaminated with e.coli bacteria.

In December 2007, a 17-year-old San Diego County girl fell ill with e.coli poisoning after consuming Rochester beef. She has since recovered, but county officials are looking for recalled beef that may still be held by local restaurants. In addition to the California victim, so far four other e.coli poisoning cases attributable to Rochester Meat products have been reported in Wisconsin. The USDA's Food Safety and Inspection Service (FSIS) announced the voluntary recall on January 12.

The San Diego search is targeting restaurants because Rochester Meat markets its products to restaurants and food services nationwide. It does not sell products to retail outlets. Neal Karels, Rochester's chief operating officer, says, "By the end of Saturday [January 12], we had contacted all of our distributors and provided them with all of the necessary information so they can in turn contact all of their customers and get the product removed from commerce." 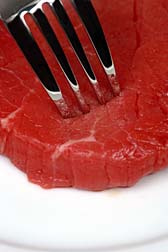 However, Bill Marler, managing partner of the Marler Clark law firm of Seattle, says that's not good enough. In a press release, he calls for the three agencies currently investigating the Rochester e.coli outbreak—FSIS and the Wisconsin and California departments of public health—to make public the names and locations of all outlets that received the contaminated Rochester Meat products.

More News
Marler says, "Public health officials' refusal to identify food establishments that served, or that could still be serving, the recalled meat means consumers may still be at risk. We are hearing from the environmental health community that at least one national chain restaurant is connected with this recall. If that is true, these public officials are playing a very dangerous game. They are betting that nobody else gets sick because they had no way of knowing they were at risk.

"The public needs to know who may have poisoned their kids," he concludes.

The Rochester Meat recall is the first major beef recall of 2008 after a record number of recalls in 2007. It's also the third for this company since 1996. According to FSIS records, the two previous recalls involved 152,000 and 30,000 pounds of meat.

According to those same records, in those two previous recalls only a fraction of the meat was actually ever recovered. This sounds like a dangerous game indeed.