In the wake of the Rochester Meat recall, things have been quiet—as they say in the westerns, "Yeah, too quiet." Minnesota-based Rochester Meat Company announced the voluntary recall of 188,000 pounds of ground beef suspected of E. coli contamination after six people fell ill in Wisconsin and California.

The beef was sold in bulk to restaurants and institutional food services; it was not sold for retail purchases and thus does not appear on supermarket shelves.

The federal Department of Agriculture (USDA), which recommended the recall to Rochester Meat on the strength of investigations by Wisconsin and California state authorities, has a policy of not revealing the purchasers of contaminated recalled meat. Consequently, consumers now do not know which restaurants received the Rochester meat and which did not. 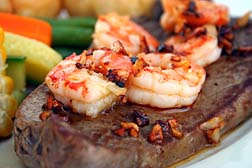 This USDA policy means that consumers concerned about avoiding outlets that may have the contaminated meat in stock—since food recalls can be hit-or-miss affairs—are pretty much left to take their own chances. Since the recall began over a week ago, rumors have abounded that an unknown and unnamed national restaurant chain received the Rochester meat, but neither USDA, Rochester Meat, nor any restaurant chains have been forthcoming. So if you're wondering if the hamburgers at the place where you had lunch are safe or not... well, you're on your own; you'll know if and when you get sick.

Attorney Bill Marler writes on his legal blog, "I have received a few phone calls and emails from concerned people about the complete failure of our national and state health authorities to tell the public where the E. coli-tainted meat from Rochester Meat landed on the public's plate. One consistently mentioned name of the recipient of the E. coli-tainted meat is the national restaurant chain, Tony Roma's." Neither the USDA nor Tony Roma's, which has locations in twenty states and over 260 worldwide, have responded to this report.

More News
An attorney handling a potential lawsuit for one of the Wisconsin victims writes, "We have been contacted many times regarding the USDA's policy to not provide a list of restaurants, food service institutions, grocery stores, or other places where consumers may have been exposed to contaminated food. A consumer alert regarding a food product that poses a high risk of serious illness is meaningless unless consumers are given enough information to determine whether they are at risk."

Another legal blogger sums it up even more simply: "Maybe public health officials can try a bit harder at protecting the public by letting consumers know which restaurants may have received the potentially dangerous meat?" Maybe they could; maybe the restaurant chains could let us know whether they received the contaminated product and whether that have pulled it from their stock; maybe many things could be done to protect the public better. For the time being, though, all we hear is a deafening silence.