Father Worries about his Incarcerated Son with Risperdal “Female Boobs”

This is Frank’s story about his son Frankie, who was prescribed Risperdal to treat ADHD when he 11 years old. (Risperdal is frequently prescribed off-label for uses not approved by the FDA.) By the time Frankie was 16, he had developed “female boobs” or gynecomastia. Frank’s son was incarcerated at 18 years of age and he will be eligible for parole in three years, when he is 29 years old. 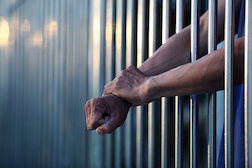 “At first Risperdal seemed to help with Frankie’s ADHD—it slowed him down. He was terrible, acting out and doing crazy things that normal kids wouldn’t do. He was always beating up on kids, and even tried it on me. He flew into rages. The ADHD diagnosis helped to understand this behavior, but he was later diagnosed with bi-polar disorder. All kinds of drugs were prescribed but only Risperdal slowed him down enough.

I first noticed the female boobs when Frankie was about 16, but didn’t think much about it because he was getting really chunky. Back then I figured it was just a part of his gaining weight, which the doctor said was a Risperdal side effect—he never said anything about Risperdal and female breasts. (I only made that connection this year, when I saw a Risperdal commercial on TV.) Frankie is a big boy, weighing in at about 280 lbs, and 5’ 7”, same height as me.

It wasn’t easy talking about it-- my son was shy about these boobies; Frankie said he didn’t feel normal and everyone teased him. Now the prison guards tease him. (Frankie is now incarcerated for selling cocaine and he also did time before this stint for 13 counts of robbery.)

I’m worried about Frankie being in jail with breasts. I tell him, ‘Do what you have to do to protect yourself,’ so he fights pretty much every day. When he first went in, aged 18, Frankie was better off fighting and getting into lock-down by himself rather than being in the general population.

I have two other children and they are both fine. Their mother wasn’t diagnosed with any mental health problems but I believe she is bi-polar like Frankie. She up and left me when Frankie was just two years old. I did what I had to do and got him to graduate; given the problems he had I taught him as much as I could.

More RISPERDAL News
Frankie quit taking Risperdal because it was bringing him down too far, taking his edge off, making him lethargic and depressed. He was getting the meds in the jailhouse but they wouldn’t let him participate in any activities like woodworking or mechanics to better himself, because they figured that he would hurt himself. But those activities would have been productive. Frankie did take plumbing courses—it was the only option-- but that’s not a good choice because he is too big.

In about three more years Frankie will be up for parole. I was able to give him money during his first sentence so he could be comfortable but now I don’t have a job so I’m hopeful that a Risperdal claim can help him. If he has a chunk of money he might be able to do right instead of pushing drugs when he gets out. These female boobs really did him in, and I think they made him mad with the world. He got a bad deal with Risperdal."

Posted by
Garry Druett
on November 23, 2017
Forced to take Risperdal and the drug is killing me